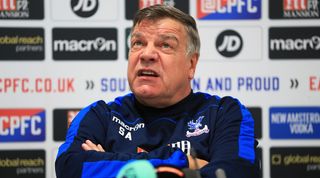 The man is sat in a Chinese restaurant, drinking a pint of wine. We should be giving him a pay rise and a statue September 26, 2016

Sam Allardyce has insisted that he won’t be tempted back into football management however great the amount of alcohol he is offered.

After pulling off another relegation escape with Crystal Palace, Allardyce announced that he would be quitting the game to focus on his hobbies which include punditry, telling bawdy anecdotes and dancing aggressively in kebab houses.

When asked by journalists whether any club could tempt him back into the game, Allardyce was emphatic that he certainly wouldn’t end up taking over someone like Watford or Stoke exactly halfway through next season.

“Not even a tiny bit of me will be tempted to return to the fray at the tail end of next season and grind out a series of positive results to haul a struggling but reasonably talented side away from the drop,” Allardyce told FFT.

“There’s not a club prestigious enough, a cash-filled suitcase heavy enough or a measure of wine large enough to get me back in the hot seat.

“I’m expecting someone like West Brom to slide a quart of wine my way in December, but even if they bring out a gallon of it I won’t budge.”

As Allardyce outlined his plans for retirement to journalists, he appeared distracted by a laptop on his desk which he repeatedly thudded at with his meaty fingers.

“All of us in the front row could clearly see that Sam was bashing out a cover letter for the Watford job," a journalist told FFT.

"At one point he broke from his prepared remarks about how fleeting life is to ask how you spell ‘transferrable skills’.

“Before he left the room he'd asked several of us if we played for Sunday League teams and if we had a flagon of wine with us.”