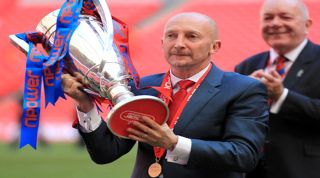 Crystal Palace have wasted no time in the wake of their sensational victory in the Championship play-off final, with the club having already identified a number of players who might prove crucial in getting the club promoted again in the 2014/15 season.

Although for many teams the summer is an opportunity to relax and briefly forget about football, the staff at Selhurst Park know that they'll have to work nonstop if they hope to have a shout at coming straight back up to the Premier League the year after next.

"We've done great to get promoted, but this is only the beginning," manager Ian Holloway told FourFourTwo."At this level, you can't tread water. This club has a long-term plan involving plenty more promotions. We plan to get promoted again at the first opportunity, in 2015, and again in 2017 and maybe 2019 too.

Although the season after next is more than a year away, Palace have already begun drawing up a shortlist of players to help in the promotion push.

"We're planning to fill the squad with players who have proved they can cut it in on a wet Tuesday night in Huddersfield," Holloway continued. "And if that means spending next season's transfer budget on players from Huddersfield Town, then so be it."

Holloway confirmed that his players would be given the next year or so to relax and prepare for the challenges ahead, and that any football they play in the meantime would be an opportunity to keep fit and express themselves.