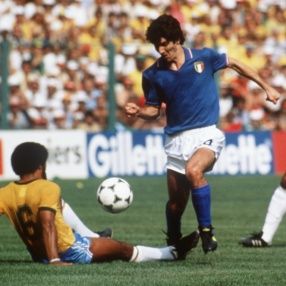 As a player, you’re always going to be associated with the finals in Spain. Is that ever a burden for you?
A lot of the time when I get stopped in the street people want to talk about the game against Brazil, which is one of those matches that has an historical importance for Italians. More often than not, they want to talk about their experiences, of where they were watching the game. They always pay me compliments, which is lovely. It’s nice to feel like you’re a small part of people’s history, a little reference point.

Yes, I’m forever tied to 1982, but I can now enjoy my past, my career as a footballer. It wasn’t always like that, it used to be a problem; I was always a very private person and still am, but it’s not a pressure. Not now.

What sort of a coach was Italy’s manager Enzo Bearzot? How important was it to you that he still believed you had something to offer after two years out of the game following that betting scandal ban?
Bearzot showed faith in me during a particularly difficult period in my life, something for which I’ll always be grateful. He helped me find my scoring touch again after two years out of the game, to enjoy my football again and find my focus and self-belief. If I had to name one person who had the greatest influence on my career, it would be Bearzot. He’s a special person for me.

What was the atmosphere like in the Italy camp during the tournament?
There were problems with the press, the usual supporters’ expectations... let's just say that it was a very unique and intense atmosphere. Did we have a siege mentality? Yes, there was a bit of that – and yes, you could say that we used that to our advantage.

Are you enjoying retirement?
Even in 1982, when I was a World Cup and Ballon d'Or winner, having other concerns outside of football helped clear my head and kept me fresh. Back when I was playing I was always thinking of other professional interests. It keeps you grounded. I love working out in my farm in Tuscany, producing wine and olive oil. From April time onwards it’s a paradise. It’s perfect, a way of relaxing and working at the same time, in a way football could never hope to match.

Do you invite ex-Azzurri team-mates to have a glass with you?
Yes, all the time. We all still get on really well, there’s still a bond there, that old team spirit. That’s the legacy of 1982.