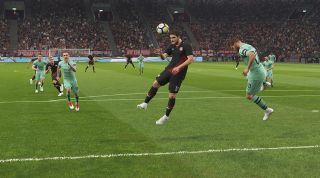 Making a new PES game every year must be a bit like supporting Rochdale. No matter how much dedication and commitment you put in, you know there’s never any chance of winning anything.

While there are myriad reasons for the Dale’s chronic lack of success (a few Lancashire Cups aside), Konami’s Pro Evolution Soccer series can point the finger at one thing: the budget of its rival FIFA.

It seems that no matter what Pro Evo does, FIFA turns up and drowns it out by bellowing about its latest signings and fancy new facilities. In recent years, though, PES has taken a different approach, offering a more simulation-based take on the beautiful game. OK, they still might not win anything, but they could pick up a few new fans along the way...

It’s not exactly news that PES lacks all the official licences required to use every authentic team name and kit – Aston Villa even referenced it in a tweet mocking Leeds United’s short-lived rebrand – but the big one it did have was the Champions League. This season, though, that’s also gone to its big rival over at EA Sports.

But you know what? It’s not as big a miss as you’d imagine. When you’ve got all the logos and graphics for a competition but it’s being contested by Italy’s PM Black White, Man Blue and holders MD White, the illusion isn’t all that convincing anyway. It was just one piece of a puzzle that had far more parts missing than were in place.

Unfortunately, the exodus doesn’t end there. Borussia Dortmund, one of only a handful of German teams that appeared in last year’s game, have also gone AWOL, replaced by their arch-rivals Schalke. The Scottish Premiership and Turkish Süper Lig are new, fully licensed additions for 2019, but of Europe’s five major leagues, only Ligue 1 is all present and correct. The others either have major names that are conspicuous by their absence, or, in the case of the Premier League, are almost entirely made up.

If you’re a fan of Ajax, Benfica or Club Brugge, PES 2019 has those leagues fully covered, but none of those shift units like having Real Madrid, Bayern Munich and Manchester United on board.

The game does have a very comprehensive editing mode, and within weeks of it being released, fan sites will post downloadable data files that overwrite the kits and team names with painstakingly detailed, user-created versions of the real thing. But while fans of football games are a very dedicated bunch, not many have the patience to bother with all of that. Why buy a homebrew kit when there’s a pub at the end of the road?

Not quite pitch perfect

Clearly, then, there’s no point in PES trying to compete with FIFA when it comes to aesthetic authenticity – but on the pitch it’s a different matter.

Where FIFA tends towards what Jurgen Klopp would call ‘heavy metal’ football, PES demands a more considered approach to the game, exploiting space and attempting to draw your opposition out of their defensive shape.

Sure, you can go direct or play counterattacking football, but if you relentlessly sprint at the opposition in the hope of beating defender after defender with sheer pace, more often than not you’ll run down dead ends. Similarly, try playing out from the back every time and you’ll soon learn that sometimes a good old-fashioned hoof into row Z just can’t be beaten. If you’re switching from years of FIFA, PES can present a pretty steep learning curve.

When you get the hang of stroking the ball about, it’s relatively easy to play safe and keep possession – but to create chances you have to take risks. Being too casual with your passes often means they get intercepted, so you’ll soon learn to up the tempo. Irritatingly, this can result in the game thinking that you’re adding extra power in order to reach a man positioned further away than your intended target, which means you give the ball away. Lose it in your own defensive third and it often results in a shot on goal, so missed chances can easily come back to bite if you’re not careful.

Physical differences between the players are less pronounced, meaning pace and sheer strength aren’t the all-powerful weapons they tend to be on FIFA, although adding fresh legs towards the end of a game can make a real difference.

A nice bit of incisive passing play can open up even the most stubborn defence, and part of the joy comes from working out which tactical approaches work best with different teams. That means PES 2019 can be frustrating, but when everything falls into place, it’s also tremendously rewarding.

Newcomers will find plenty to get to grips with, then, but regular players will feel immediately at home, welcomed back by an almost identical, sluggish menu system and the same peculiar phrases from returning commentators Peter Drury and Jim Beglin.

While PES 2019’s Master League mode hasn’t changed much, its formula remains highly addictive, even if the interface makes it look as cutting-edge as an old mobile game.

Just like FIFA’s Career mode, Master League sees you taking over as manager of a club. Unlike dedicated management sims like Football Manager, you also take direct control on the pitch. While it’s hard to fault the actual gameplay, the menus can be confusing to navigate, there are endless pointless notifications and the actual process of negotiating a transfer is needlessly complex.

You’re also likely to spot some very bizarre transfer market activity. During FFT’s time in charge of Napoli, we were offered over £32m for Marek Hamsik on deadline day, which would be perfectly reasonable if it hadn’t come from Real Sociedad. We also saw Hector Bellerin swap Arsenal for Lokomotiv Moscow, while Danny Simpson secured an incredibly unlikely move to Athletic Bilbao. Is it just FFT that didn’t realise Greater Manchester was part of the Basque country?

Offline you also get Become a Legend mode, which puts you in control of a single player and charges you with turning them into a superstar. It’s a bit like FIFA’s The Journey but without all the extra-curricular business and guest appearances from CR7, which makes it feel a bit sterile as a result.

Random Selection mode fills your chosen real-life club (or at least Pro Evo’s version of it) with a lucky dip of players from around the world, but its novelty appeal is limited – especially with FIFA 19 introducing some fun new Kick-Off modes such as Headers & Volleys which should give your FIFA nights a new twist.

In recent years, PES’s online matchmaking system has been painfully slow and practically useless, routinely pitting somebody playing as Brighton, Frosinone or Nime against Barcelona, Liverpool or PSG and simply awarding more league points to the weaker team if they win.

In a way it’s a realistic approach to take. Real-life teams don’t just play against opponents of exactly the same strength, but unless you consistently select one of the game’s best sides, you’ll routinely find yourself in mismatched games.

When you do get a competitive pairing, PES offers some of the most engrossing multiplayer football ever, but those games are so few and far between that you just start to hope for the occasional giant killing, like a lower-league team playing in the FA Cup. For some, that’ll eventually grow tiring. Considering online leagues are such a huge part of the game that keep people coming back throughout the course of the season, it’s a glaring own goal.

Admittedly, it does seem to take less time to find human opponents to play against, but that’s scant reward when you come up against the other thing that can potentially ruin an online game: lag. If your connection isn’t rock solid, any slow-down renders the game practically unplayable, as the on-screen action stutters along and button presses are delayed or fail to register completely. This isn’t PES’s fault, of course, but with anticipation often more important than reactions, it does seem particularly pronounced.

On the whole, PES doesn’t feel like it’s changed all that much in the past three years; not just in terms of the lacklustre presentation and commentary, but the general gameplay. There’s perhaps a tad more dynamism to the attacking play now, and FIFA-style quick substitutions have been introduced so you don’t have to dive into the pause menu every time you want to make a change, but seasoned players may feel like they’re playing a database update rather than a whole new game.

PES has offered a superbly engrossing game of football for a few years now, one that reproduces the patterns and rhythms of a match brilliantly and genuinely rivals FIFA in terms of playability, but you have to work too hard to make it look as good as it feels.

Pump balls into the box towards your targetman or pass it around waiting for the right time to strike? PES lets you play football the way you want to.

Crowds look like a group of individuals rather than a mass of copied-and-pasted clones, although those ‘WE’RE HERE TO WIN’ banners could still do with some work.

They may be restricted to the bigger names, but when PES’s likenesses are good they’re very good, even if Mauro Icardi does look like an undead Jack Sparrow.

There aren’t many, but the pre-match sequences at the licensed stadiums are spot-on, right down to the coal-covered walls of the tunnel at Schalke’s Veltins Arena

And one we hate…

1. Match made in hell

Konami has had two years to fix its inadequate matchmaking system for online games. It's not been done this time either.