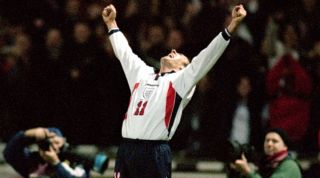 England will take on the Czech Republic on Friday night, in what will be the fourth fixture between these two countries since the latter’s independence in 1993.

The Three Lions boast an unbeaten record in the head-to-heads so far. And pleasingly, the three previous matches all took place 10 seasons apart, which gives us a nice spread of players who have appeared in them. In fact, only one England player appeared in more than one game.

But how many do you think you can name?

There are nine minutes on the clock for you to get as many of the 44 names from these England teamsheets as possible. And if you complain, just be pleased we’re not asking you to get the Czech players as well.

A word of warning: the 1998/99 game features what we at FourFourTwo would describe as A Very Weird England Line-Up. It even includes one player's sole international cap. If you get that one, we’ll buy you a pint*.

Once you’re done, send us a screenshot of your score (don’t be shy, you’re not getting full marks) to @FourFourTwo, and challenge a friend you think will do worse so you can rub their stupid ignorance in their face.

*We regret to inform you that we will absolutely not buy you a pint.

QUIZ Can you name every player to score 50+ goals for a single Premier League club?