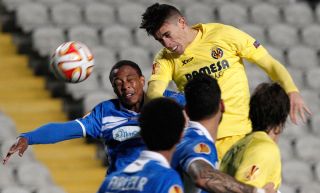 Arsenal don't exactly make a habit of buying centre-backs, but it is little wonder they have entered into negotiations with Gabriel Paulista. The 24-year-old Villarreal man has established himself as one of the most consistent performers in La Liga.

Having shown great consistency while skilfully adapting to every step up so far in his career – as a teenage sensation in Brazil, then a commanding centre-back in Spain – he could be just the sort of signing Arsene Wenger needs to maintain his footballing principles while stiffening his backline.

Put simply, he could be about to join Arsenal. "We want the player and don't necessarily want to do it in the summer - we have to try and sort it out now," Gunners boss Arsene Wenger said on Wednesday morning.

Paulista made his name in his native Brazil with Vitoria. Breaking into the first team in 2010 at just 19, he matured quickly into being first-choice centre-half and was named the best central defender in the Campeonato Baiano in both 2012 and 2013 – the latter campaign seeing Vitoria win the championship.

With scouts noting his talent and remarkable consistency, Villarreal were convinced enough to take him across the Atlantic on a five-year contract in August 2013.

During his first season, the Brazilian was eased into the action as understudy to the experienced duo of José Antonio Dorado and Mateo Musacchio. Even so, Villarreal manager Marcelino handed him 18 appearances as the Yellow Submarine finished sixth in La Liga, qualifying for the Europa League.

This term, Paulista has been ever-present and formed a reliable partnership with Victor Ruiz. Sixth in the table, Villarreal have conceded just 17 goals – only Real Madrid and Barcelona have shipped fewer – and the Brazilian has been crucial in maintaining solidity at the back.

At this stage of his career, the most beneficial thing for Paulista would be a first-class education at a top European club and Arsenal certainly fit that description.

Equally, they need new blood: Per Mertesacker is now 30, Laurent Koscielny is struggling to fully rid himself of an Achilles injury, and Wenger has been pressed into naming all manner of thrown-together back fours. The scope for rapid development within the first team is enticing for Paulista.

There are parallels with Koscielny, who was also 24 when he arrived at the Emirates in 2009. Like the Frenchman, Paulista has the talent and maturity to establish himself as a leader in the Arsenal dressing room.

Furthermore, Paulista’s education thus far has incorporated versatility as he has occupied both the left-back and right-back roles during his time in Spain. This would give Wenger more flexibility and the potential to bed the player into his system outside the key centre-back spots.

Wenger has recently shown a predilection for utilising technically excellent players in various roles; Calum Chambers an example. Paulista's positional flexibility increases his usefulness to the Premier League side.

Besides his positional versatility, Paulista’s tenacity and aggression make him a great fit for the physical demands of the Premier League.

He thrives on closely man-marking the opponent and using his reading of the game to outwit attackers, but he also knows when to get stuck in: he has won 16 out of 19 attempted tackles this season.

Villarreal have garnered plaudits for their proficiency to play out from the back and Paulista’s technique has been central in making this tactic work. Comfortable with the ball at his feet, Paulista’s athleticism enables him to stride out of defence and help a fluid transition from defence to attack.

If Paulista seems to have the stereotypical advantages of an Arsenal player – an intelligent, flexible ball-player – he also shares their typical shortfalls: lack of physical strength and aerial dominance, coupled with a slight tendency to overplay.

Although he has developed physically and at 6ft 1.5in is no shrimp, he has been outmuscled by some of La Liga's beefier strikers and may find the Premier League demands more physicality.

He needs to improve in aerial duels; Mertesacker aside, Arsenal lack a commanding presence but Paulista is unlikely to fully remedy this shortcoming.

He has also been criticised for some decisions he has made in possession: his distribution-from-defence style suits Arsenal, but if a pass does not reach its intended target, his weaknesses may be highlighted.

"I was not upset at what Gabriel said. Any player can give an opinion. That is his way of thinking and acting, he is a tremendous kid and an exemplary professional. He has his head here, and wants to keep showing his worth here” – Villarreal manager Marcelino.

Paulista’s contract clause is set at €20 million (£15.3m) and if Arsenal chose to activate it, he would become the club’s most expensive defender ever.

The deal is dependent on Paulista obtaining a work permit for the UK. He has never been capped by Brazil at senior level and since he does not have an EU passport, the permit negotiations may be an arduous process. That said, gaining a work permit will only become an issue if the two clubs fail to agree on a fee. Villarreal are believe to be holding out for that €20m fee but it is unknown if Arsenal value Paulista that highly. However, if the deal doesn't go through this month and Paulista continues the form he has shown this season, there is no doubt that other high-profile clubs will attempt to secure his services come the summer.