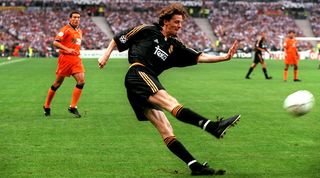 My debut set me on the road to a Premier League career that was everything I’d ever dreamed of. I’d travelled with the squad for about a year or so but that was in the days when there were only one or two substitutes, so I never actually got changed into my kit.

Then suddenly Kenny Dalglish put me in the squad to give me a feel of first-team football. I was very nervous. I came on for the last 10 or 15 minutes, looking like Bambi as I ran on with really short shorts. It was an amazing moment.

The 1992 FA Cup was the first trophy I ever won – I was only 20. I dislocated my kneecap in the semi-final against Portsmouth, and what with the operation, I didn’t think I’d be back in time to feature in the final. I played in a reserve game that week, thinking that I wanted to get myself fit just in case.

Then John Barnes picked up an injury and missed out on the final. Graeme Souness asked me how fit I was, and thankfully I was quite thin so I didn’t really put any weight on. I said I was definitely OK and I was put back into the team. I played really well in that final [and won man of the match].

Winning the League Cup and scoring two goals was very special. I think the goalkeeper should have stopped the first one, but the second one was nice. I got the man-of-the-match trophy from Stanley Matthews too, which was a really lovely moment.

Scoring at Wembley to win something is what you get into football for. My dad took me to Wembley to watch Everton win trophies and I was ecstatic then, so to actually be on the other side of it and be the person lifting trophies was poignant.

Representing England at Euro 96 was unique, and there were so many emotions in the Scotland game. We drew the first match against Switzerland and had to get a result. We were leading 1-0, then I was absolutely terrified Gary McAllister was going to equalise from the penalty spot after Tony Adams had fouled Gordon Durie. McAllister missed, then Gazza scored our second goal.

I left Liverpool because I wanted to play in the Champions League, so to win it in my first Real Madrid season was brilliant. Everyone knows your first year at a different club and in a different country is hard.

We didn’t do too well in La Liga, but we played very well in the Champions League, a historic competition for the club. When you play for Real Madrid, it’s all about winning things. We were comfortable winners, but to score in front of my family and friends, and for people to say I was man of the match, made it all the sweeter.

This feature originally appeared in the November 2015 issue of FourFourTwo. Subscribe!