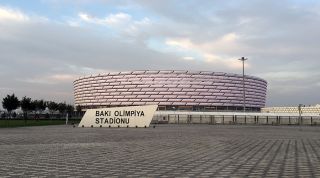 Amid the celebrations after penalty shoot-out victory over Eintracht Frankfurt came a familiar tune blaring over the PA system. Chelsea have long played One Step Beyond at Stamford Bridge, but this time it really was Madness.

By winning their Europa League semi-final, the Blues had earned themselves a trip to Baku for the final: a full 2,500 miles beyond, as it turns out.

Arsenal will join them – the squads could travel together on the same five-and-a-half-hour flight if they wanted. But their fans might not be so lucky. Passenger flights are limited and prohibitively expensive.

At the time of writing, the cheapest way of flying – leaving London on the day before the game – involves a 20-hour trek via Katowice and Kiev. The return flight on the day after the match is 22 hours via Tehran, Istanbul and Geneva. The price is around £500. Reduce the journey times to anything approaching sensible, and the price rises as high as £2,000.

Fans have been forced to investigate other ways of getting there, turning their trip to the Europa League final into an episode of the BBC's Race Across The World.

UEFA didn't choose Baku as the Europa League final for the convenience of football fans. A country with new riches from oil money, Azerbaijan were extremely keen to host the event, as part of a long campaign to position themselves as part of Europe: hence their hosting of the European Games, a Formula 1 race specifically entitled the ‘European Grand Prix’ for no apparent reason, the Eurovision Song Contest, and next year, matches at Euro 2020.

A small part of Azerbaijan is geographically in Europe, but officially, Baku is not. It says plenty that, given all the travel difficulties, the choice of location for the Europa League final isn’t even the biggest problem at all.

That’s the ticket allocation – only 6,000 tickets for each club, in a stadium with a capacity of 68,700. Sure, many fans won’t want to travel anyway, but more tickets should rightfully be theirs if they want them.

A total of 37,500 tickets were previously made available to fans all across Europe in a public ballot, which seems excessive. Even more baffling is what happened to the other 19,000 – over a third more than the allocation of Arsenal and Chelsea combined. Those will largely go to corporate guests.

What sort of match atmosphere will it create, and who is this game actually for? If it isn’t for Arsenal and Chelsea, then what’s the point of the entire Europa League; a competition contested by more than 200 clubs, over a period of 11 months?

Hosting a final in Baku doesn’t just present issues for the fans, but for Arsenal too.

Henrikh Mkhitaryan is Armenian. He’s played in 11 of the Gunners’ Europa League matches this season, but there are no diplomatic relations between Armenia and Azerbaijan because of a war between the two countries from 1988-94 over the Artsakh region, which still remains disputed territory.

Given the security concerns, Mkhitaryan didn’t travel to Baku when Borussia Dortmund faced Gabala in the Europa League in 2015, and nor did he when Arsenal faced Qarabag earlier in this season’s competition. "He cannot travel here," Unai Emery said at the time, with uncertainty over whether his player would be granted a visa.

UEFA have offered to help Mkhitaryan obtain a visa for the final. Should they be unsuccessful, it would perhaps provide the biggest question mark of all over this game being held in Baku. If a player from one of the finalists isn’t even able to play because he’s not allowed in the country, it would make a mockery of both the final and the whole 11-month Europa League.

If UEFA haven’t given enough thoughts to fans or even players in their choice of venue for the Europa League final, there could be more trouble on the horizon.

Further reports in the New York Times have suggested that UEFA could be planning wholesale changes to the format of the Champions League – the same format that has delivered entertainment for years, and the very same that has produced one of the most sensational Champions League seasons for a long time.

One might suggest that when it comes to entertainment value, don’t fix what isn’t broken. But finances come into play, as does the desire of Europe’s biggest clubs to ensure their participation.

The number of teams could increase from 2024, with a promotion and relegation system introduced, instead of the current qualification format via the domestic leagues each season. Emerging teams will find it more difficult than ever to oust the traditional superpowers.

What it will mean for fans or the entertainment of TV viewers at home remains to be seen. But UEFA would be well advised to think carefully – just this once?

QUIZ! Can you name the players who've featured in the Premier League AND scored a Champions League hat-trick?