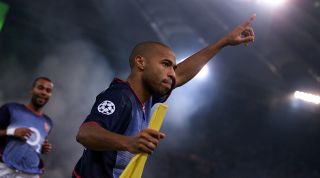 We’d like to think you’ve finally come down off that ceiling after consecutive nights of Champions League excellence – at least enough to do this quiz, anyway.

According to Wikipedia, *clears throat*: “90 players from 35 countries have scored three goals or more in a single match on a total of 123 occasions for 45 different clubs in 15 different leagues.” That’s numberwang.

PSV’s Juul Ellerman was the first man to achieve the feat in a 6-0 demolition of Lithuania’s FK Vilnius, but the forward never played away from his homeland so doesn’t qualify for today’s teaser.

See, then, if you can recall the players who do. We’re giving you 10 minutes to name as many former (and the odd current) Premier League players who have a Champions League treble to their name.

Tell us how you do @FourFourTwo with a screenshot as proof – retweets for the good ‘uns who don’t give away answers. Good luck!

QUIZ! Can you name the 26 highest-scoring Brazilians in Champions League history?

FEATURE What happened to Kerlon? The forgotten seal dribbler who entertained the world