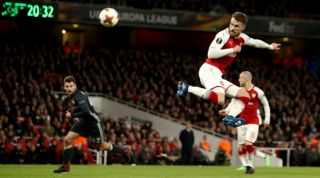 Arsenal beat the Russian Premier League outfit 4-1 at the Emirates Stadium on Thursday night, but the highlight of the game was Ramsey's 28th-minute goal which gave the Gunners a commanding lead.

After some fine build-up play involving Ramsey himself, Alexandre Lacazette and Nacho Monreal, Mesut Ozil dinked a delightful ball into the box which the Wales international cooly backheeled over goalkeeper Igor Akinfeev.

It was Ramsey's second of the game, having opened the scoring, and sandwiched two Lacazette goals in a fruitful first half.

Arsenal will play the second leg at Arena CSKA next Thursday.

Italian referees association says it has received bullets in the post