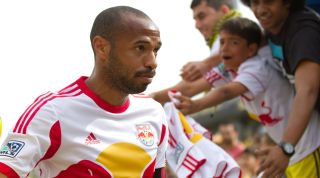 Every year the finest players in MLS come together and take on a visiting club side, usually from Europe.

In an admirable display of democracy, a squad of stars from across the league is selected by a chosen manager, the MLS Commissioner and supporters, to form the oh-so-Americanly-named 'MLS All-Stars'.

Former Ipswich and Arsenal striker Paul Mariner has been working in American soccer (that funny little word, we know) for over a decade, and is now a lead pundit for Stateside ESPN. So, we thought, who better to ask for their selection than him? He goes for a 4-2-3-1 formation – but there's no place for Clint Dempsey...

"The Peruvian has made a fantastic impact in the league and with his club. His shot-stopping ability is excellent, while he has an excellent command of his box. A safe pair of hands."

"Tony came a long time ago and took a while to establish himself, but now he's one of the best in his position. He’s a very clean full-back with good pace, and his distribution is excellent. He overlaps well, too. I'd say he's an ideal modern right-back."

"With the help of Bruce Arena he's really turned himself into one of the most commanding central defenders in the league. He was named in the MLS' Team of the Year in 2010 and 2011, and it's no surprise to see him as a regular in the national team now."

"He’s a natural left-footed player and very, very calm. He’s got decent pace and rarely gets into the wrong positions – all of the qualities you'd want in a central defender. He reads the game extremely well and has formed a solid central defensive partnership for the national side with Gonzalez."

"Corey came into the league as a flying winger but his coach, Dominic Kinnear, has converted him into a left-back with great success. He’s very similar to Beltran with his excellent left foot, which gives the back four fantastic balance. Again, he's always ready to cover and defends really well in one-on-one situations. He's not afraid to get down the pitch and overlap either, though. His service into the opposition box is excellent."

"Kyle knows this league inside out. He knows how to screen the back four extremely well, and can do that alone. Beckerman is the controller. Basically you get your full-backs going safe in the knowledge that he will be there sitting in front of the defence."

"I'd have Will alongside Beckerman. While he has always been a fantastic player, the Canadian is having a particularly great season in Portland. He can score goals from midfield – always an admirable quality – and has a really good eye for a pass."

"He had a sabbatical for a few months, came out of the league and then back again. Landon played sensationally for the national team in the Gold Cup, and proved that he hasn't lost any of his powers. He has electric pace and his eye for a goal is there for all to see."

"Henry will always be in this team. On his day he’s still such a fantastic player in this league. He can do everything; take set-pieces, dazzle in open play and could keep picking out the passes for Robbie Keane going through the middle."

"Zusi has not come from nowhere, but is the product of a classic coaching job by his manager, Peter Vermes. He has pace, and works up and down the left for Kansas City. He can score goals, make assists, and he works very hard on both sides of the pitch. He’s a pretty simple selection."

"In this league he’s the master of putting chances away. You know that when you play at a very high level, you only get one or two chances. With the supply lines he has, Robbie will get the service he requires – and he makes the most of it. All he has to do is stay central in the final third and get into the box. He's fantastic at finding opportunities for himself. If you give him half a yard, the ball is in the back of the net."