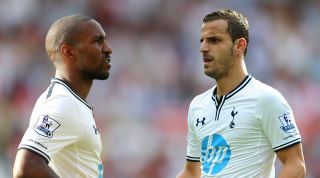 On the face of it, Roberto Soldado and Jermain Defoe are very similar players.

Both are viewed as predatory strikers with the ability to finish - Soldado is renowned for his volleying, while Defoe is known for his powerful strikes with either foot; both aim to stretch opposing defences with their movement - Defoe playing mostly on the shoulder of the opposition defence, and Soldado looking to make runs in behind; but neither tends to involve himself in general play - certainly not to the same extent as Emmanuel Adebayor, for example.

Of Soldado's 30 goals for Valencia last season, 24 came from within the box. This indicates his awareness and movement, but also highlights his reliance on the service of his team-mates. Likewise, Defoe is mostly a striker who scores from within the box - ten of his 11 Premier League goals last season were scored inside the area. However, there are crucial differences.

Soldado, despite not dropping deep and becoming involved early in build-up play, does have a more significant role in bringing others into the game, either through his movement (more on this to follow) or by playing with his back to goal. While Defoe rarely creates for others, he is more likely to create for himself - as illustrated by his goal in last season's 3-1 victory over West Ham.

Prior to last Sunday’s 3-0 defeat to same opponents, many Tottenham fans were clamouring for Defoe to start against his former club, such has been his form in the Europa League and League Cup.

However, post-match, just as many fans were questioning Andres Villas-Boas’ decision to start with Defoe, such was his inability to link play, stretch the Hammers’ defence, and his profligacy in front of goal. Of course, it is never sensible to make judgements on a player based solely on one game, but Defoe’s performance - and the effect it had on his teammates - did perhaps illustrate that while Soldado has not yet been free-scoring, he has had a positive impact in games.

In Spurs’ opening game of the season at Crystal Palace, Villas-Boas started with Soldado, with Gylfi Sigurdsson playing off him as the No.10 in a 4-2-3-1. While Sigurdsson didn't have a particularly good game, he made a number of forward passes, had a couple of efforts on goal, and set up some shooting opportunities from wide areas. Soldado touched the ball 41 times in the match, was relatively involved, and scored a penalty. There seemed to be some semblance of an understanding.

In the following league game against Swansea, Villas-Boas made a more defensive selection, opting for Mousa Dembélé as the most advanced central midfield player, with Soldado again leading the line. Dembélé’s attacking dashboard illustrates how he struggled to involve himself in the final third, and Soldado ended the game with just 21 touches - although one was another penalty, the game's only goal.

Villas-Boas stuck with the same midfield against Arsenal, with similar results. Soldado was isolated again, and ended the game having had just 25 touches. Dembélé struggled, and barely managed a successful forward pass in the final third. It was becoming clear that Dembélé and Soldado were not a pair that would instantly gel.

The arrival of Christian Eriksen at the end of the transfer window meant that Dembélé moved back into a more familiar deeper role, and the young Dane started behind Soldado against Norwich City.

Although Soldado was not that much more involved than in the previous two matches (he had 32 touches), Eriksen’s introduction led to Spurs seeing a lot more of the ball in dangerous areas, and they scored their first two goals from open play this season. Eriksen grabbed the assist for Sigurdsson’s first after a nice piece of link-up with Soldado, before getting the Modric-esque 'assist of the assist' for the second.

The improvement in the team after the introduction of Eriksen was telling, but the intelligence of Soldado to play ahead of him was also vital.

Against West Ham - Defoe’s only league start - the England striker had 24 touches - 15 were passes, none of which were particularly progressive. His dashboard actually shows him coming deeper to get involved, the opposite of what is required from a lone forward playing against a very compact opponent.

In Villas-Boas’ favoured formation at Spurs this season - a 4-2-3-1 with inverted wingers - it is vital that the striker helps to create space for the wide players to get into the box, and weigh in with goals.

Soldado played a vital role in Sigurdsson’s goal against Chelsea. First, he darted in behind Gary Cahill, creating the space which Sigurdsson then filled, the Spaniard then intelligently laid Eriksen’s pass off for the onrushing Icelander. Obviously it is difficult to say what Defoe would have done in the same situation, but it is not beyond the realms of possibility to suggest that, had he received the ball in the same position, he might have attempted to turn onto his right foot and get a shot away.

In ten full seasons as a Premier League player, Defoe has only once scored 15 league goals or more in a single season. In 2009/10, he managed 18, five of which came in the the 9-1 stroll against Wigan. In contrast, Soldado managed 24 goals last season in La Liga, and managed 17, 18, and 16 respectively in the three seasons before.

So while they are similar players, and there are certainly question marks over whether Spurs have overpaid for Soldado - it seems clear that he is an upgrade on Defoe in terms of both goals and all-round contribution.

That is not to say, though, that Defoe no longer has a role to play. That may mostly be limited to coming off the substitutes bench, but there's probably no better man for the job; as OptaJoe tweeted last week, Defoe has scored more goals as a substitute in the Premier League [21] than any other player.