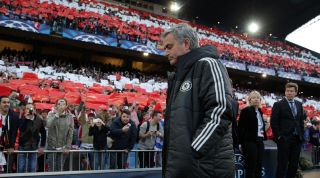 Last week's stalemate at the Vicente Calderon was a tactical affair between two of the world's top counter-attacking managers. The similarity in the two teams' philosophies is evident, despite the contrasting budgets they operate on.

Chelsea and Atletico Madrid have the best defensive records in their respective leagues, while they are both strong from set-pieces. When it was suggested before the first leg that Chelsea might give Atletico the ball, captain Gabi laughed. "We'll give it back," the Rojiblancos skipper joked.

It didn't quite work out that way; Atletico took it upon themselves to keep possession and attempt to break down Chelsea's stubborn back-line. The Blues defended deep in numbers, with their two wide players working as extra midfielders and providing cover for full-backs Cesar Azpilicueta and Ashley Cole.

Jose Mourinho's approach was described by some as 'parking the bus' or 'anti-football', while for others it was a tactical masterclass. The approach was repeated at the weekend when Chelsea beat Liverpool 2-0 to move within two points of the Premier League leaders.

The reality is that it was none of the above. Every manager is within their right to play any style they feel is necessary to get the required result, as long as it's within the rules. There is not a correct way to play football; what's appeasing on the eye to some might not be to others.

At the other end of the scale it's too much to suggest Mourinho was out-thinking his rivals in the dugout, however. The organisation and shape of the team was fantastic in Madrid, although in an attacking sense they were poor and lacked imagination in the final third. At Anfield they stopped Brendan Rodgers' tricky Reds from scoring, but without the miscontrol and untimely slip from Steven Gerrard it could well have been a very different outcome.

Mourinho can often be unfairly perceived as a 'defensive coach', when really he is just a pragmatic one. His Real Madrid side certainly weren't cautious, and he will tailor his tactics to the players he has at his disposal. It's fair to question the inventiveness of a team that costs three times the amount of its opposition, but that would be of little concern to Mourinho or any Chelsea fan should they win the Champions League for a second time this year.

In order to do that they will need to beat los Rojiblancos at Stamford Bridge. While Mourinho has largely stolen the headlines, relatively little has been said of Diego Simeone and the way he has steered Atletico Madrid to their first European Cup semi-final for 40 years.

The 0-0 was just as profitable for the Argentine: a score draw at Stamford Bridge and Atletico are in the final. His team have shown that they can control Chelsea, and have a striker in their ranks who has scored more than the combined total of Samuel Eto'o, Demba Ba and Fernando Torres. He is also a striker the Blues may well make their No.1 target this summer.

Diego Costa's individual ability is frightening; his mere presence in the penalty area is enough to unsettle most centre-backs. His pace, power, drive and determination will see him get at least one good opportunity to net in west London, although it's not simply about nullifying the danger of the Brazilian-born forward when David Villa, Raul Garcia, Koke, Diego, Gabi and Arda Turan all provide various goal threats. These occasions often see the unlikeliest of heroes.

Chelsea have shown how resilient they can be in defence, and their record of only seven goals conceded in the last 12 matches is solid, but they have lost four of those matches.

Atletico have let in only three goals in the same timescale and not lost for over two months. They currently boast a run of six consecutive clean sheets, and have stood firm for more than nine hours since Neymar netted against them at the Camp Nou. Some will argue that La Liga isn't as competitive as England, and the level of opposition not as strong. But Atleti have played Real Madrid, Milan, Athletic Bilbao, Valencia and Barcelona (twice) in that period.

Their defensive unit is rarely changed, and it's that consistency which enables them to understand each others' actions. Simeone's team are drilled to defend as a team, while his rotations usually occur further up the pitch.

Goalkeeper Thibaut Courtois may be on loan from Chelsea, but he has been at the Calderon for three years now. Every season he has matured and grown in stature alongside his team. At right-back, Juanfran is a converted winger; it was Simeone who switched his position, and helped earn the Spaniard six caps for his country. On the left, Filipe Luis makes the third-highest number of tackles per game in Spain. The Brazilian should be part of the squad that competes for the World Cup in his home country.

Centre-backs Diego Godin and Miranda are excellent readers of the game. They make a combined average of 12 clearances per match and are both comfortable playing the ball out from the back to help their full-backs and midfielders begin attacks.

Atletico are every bit as good as Chelsea defensively, and are led by a coach who unites his players with an effective us-against-the-rest mentality. With the attacking prowess of Costa, it's fair to assume they are more potent in the penalty area than their English counterparts.