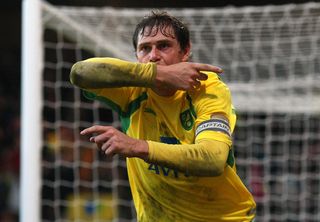 In recognition of the striker, the PA news agency looks at other cult heroes in football.

Bought for just £400,000 with the Canaries in turmoil after their relegation to League One in 2009, Holt led them back into the Premier League in successive seasons.

The striker scored 78 goals in 168 games – including a hat-trick against Ipswich – winning League One, finishing second in the Championship before coming 12th in the top flight. He was Norwich’s player of the year for three straight seasons.

Holt was also the second top scoring Englishman – behind Wayne Rooney – after netting 15 times in the Premier League in 2011-12 but was bizarrely overlooked by Roy Hodgson for England’s Euro 2012 squad.

Still revered at Villa Park and his nickname ‘God’ underlines what high esteem he was and is held in.

McGrath joined from Manchester United and Villa finished league runners-up twice – in 1990 and then in 1993.

Even at 33 he won the PFA Player of the Year in 1993 and helped Villa win the 1994 and 1996 League Cups despite barely training due to a knee injury and battling a drink problem.

The goalkeeper joined in 2004 from Dundee but it took three years for him to establish himself as Palace’s number one having been Gabor Kiraly’s understudy.

He won the club’s player of the year award four times and made 405 appearances for the Eagles – the most by any goalkeeper in Palace’s history before he left in 2019.

The Argentine helped them to promotion in 2013 and to the FA Cup final in 2016, where Palace lost to Manchester United.

The former Argentina international was only at the King Power Stadium for a season but made a lasting impact.

The club shop twice ran out of ‘A’s such was the demand for his name and shirt.

He helped keep the Foxes up in 2014-15 – memorably scoring in their 5-3 comeback win over Manchester United early in the season – but then left and missed out on their historic title win the next year.

🎬 We dig into the archives to relive some of the finest goals scored by players wearing the #Swans' #⃣1⃣0⃣ shirt 👕— Swansea City AFC (@SwansOfficial) April 8, 2020

In four years Trundle scored 78 goals in 146 league games, helping to fire Swansea out of League Two in 2004.

He picked up an EFL Trophy winners’ medal in 2006 before leaving for Bristol City a year later.

Trundled returned on loan in 2009-10 as Swansea missed out on the play-offs by a point and he is now a club ambassador.