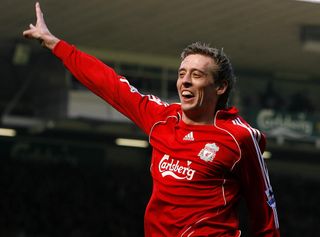 Former England striker Peter Crouch has announced his retirement from football at the age of 38.

Here, PA takes a look at five of the forward’s best goals.

Crouch won a UEFA poll in April this year for the best goal ever scored in the Champions League thanks to his spectacular overhead kick for Liverpool against Galatasaray in 2006.

The goal was one of four shortlisted by UEFA, with the 6ft 7in Englishman beating off efforts by Gareth Bale, Cristiano Ronaldo and Mario Mandzukic.

Crouch stunned Manchester City, who were on their way to the Premier League title in 2012, when he fired Stoke into the lead with a stunning goal from outside the area in their top-flight clash in March of that year. Crouch coolly brought the ball down at the corner of the box before firing it into the top-left corner on the half-volley. The game ended 1-1 after Yaya Toure cancelled out Crouch’s wonder strike.

Sven-Goran Eriksson’s England were looking to make a statement against minnows Trinidad and Tobago at the 2006 World Cup in Germany after a narrow 1-0 win in their opening group game against Paraguay. After 83 minutes and still deadlocked at 0-0, David Beckham whipped in a cross which was headed in by Crouch – but only after he had pulled defender Brent Sancho’s dreadlocks which stopped him from getting off the ground. Steven Gerrard scored a second and England eventually went out in the quarter-finals.

Arguably Crouch became more renowned for his goal celebrations than many of the goals themselves. Crouch marked his goal in a pre-World Cup international friendly against Hungary in 2006 with the robot celebration for which he would become known. He then unleashed his quirky dance moves again against Jamaica during the tournament.

Crouch named his hat-trick goal for Liverpool against Arsenal at Anfield in March 2007 as one of his best. He scored his first goal with his right foot, headed in the second and showed deft control to slot in the third with his left foot in front of The Kop.