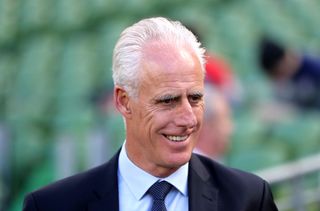 Mick McCarthy will send the Republic of Ireland into the toughest game of his second spell in charge to date when they meet Switzerland in a Euro 2020 qualifier on Thursday evening.

The Republic have collected 10 points from a possible 12 in the campaign so far, but nine of those have come at the expense of Gibraltar and Georgia, neither of whom are expected to make a significant impact on the Group D table.

Here, the PA news agency takes a look at some of the talking points surrounding the game in Dublin.

Tough at the top

Ireland sit exactly where they hoped to be going into the game, having beaten Gibraltar home and away and Georgia at the Aviva Stadium, as well as returning from Denmark in June with a hard-earned point. However, the second half of the campaign, which includes trips to Tbilisi and Geneva next month before the Danes head for Dublin, was always likely to be much tougher and McCarthy’s men are there to be shot at as the Swiss and Denmark attempt to reel them in.

The Republic have won few admirers for their style of play over the years – not that it bothers their manager one bit – and few sides arrive at the Aviva expecting anything other than a lung-bursting, physical encounter. However, like predecessors Giovanni Trapattoni and Martin O’Neill, McCarthy wants to add a little more creativity to the mix and Alan Judge, whose free-kick provided the ammunition for Shane Duffy’s equaliser in Denmark, could just be the man to provide it. Judge’s international career has been severely limited by injury – indeed, he fractured his wrist moments after his telling intervention at the Telia Parken Stadium.

Switzerland are currently ranked the 11th best team in the world, 21 places above Ireland, and, while the Republic have taken bigger scalps in recent seasons, history suggests they may have their work cut out this time around. They have met the Swiss in competitive games on eight occasions and won only twice, the last of them a 3-0 World Cup qualifier victory at Lansdowne Road in June 1985.

Much of the talk in Ireland during the build-up to the game has centred around the absence from the Swiss squad of Xherdan Shaqiri, who has made himself unavailable to national coach Vladimir Petkovic to concentrate on his club career with Liverpool. However, the Swiss have other threats and it is perhaps significant that their five goals in the competition to date have been scored by five different players, none of them Shaqiri.

Ireland’s four qualifiers have yielded a total of just five goals. and none of them have been scored by a striker, with defender Shane Duffy and midfielders Jeff Hendrick, Conor Hourihane and Robbie Brady the men to register, along with an own goal from Gibraltar’s Joseph Chipolina. There are three specialist strikers in the squad for the Switzerland game – Sheffield United pair David McGoldrick and Callum Robinson and Stoke’s Scott Hogan – and none has yet scored at senior international level.