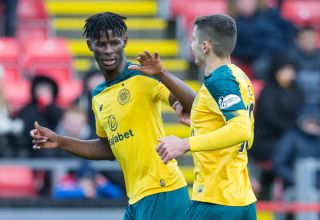 Storm Ciara swept the UK this weekend but the William Hill Scottish Cup was left untouched.

Here, the PA news agency looks at five things we learned from the last-16 matches.

Celtic flex their muscles against Clyde

Neil Lennon made six changes to his Celtic side but they still ran out comfortable 3-0 winners over Clyde.

Top stars such as Callum McGregor and Odsonne Edouard were given the day off as the wind and rain battered Broadwood.

However, there was never any danger of Clyde repeating their shock cup win over the Hoops in 2006 as goals from French midfielder Olivier Ntcham, skipper Scott Brown and substitute Vakoun Bayo secured a trip to St Johnstone in the next round.

The victory made it 33 successive domestic cup-tie wins and took the holders another step towards a fourth successive Scottish Cup trophy triumph.

Alfredo Morelos is back on the goal train

The Colombian striker scored for the first time in five games in Rangers’ 4-1 win at Hamilton on Saturday.

A close-range header for Rangers’ third was his first goal of 2020 and it took his tally for the season to 29.

Steven Gerrard hopes the effort can get Morelos up and running again on the goal trail in the second half of the season and the Gers boss knows that has to happen if there is to be silverware at Ibrox this season.

Aberdeen are on the verge of an unwanted record

The Dons equalled a club record of five consecutive games without scoring when they were held to a goalless draw by Kilmarnock – their most barren run since 1973.

That left manager Derek McInnes “angry and embarrassed” and he will demand better in the final third when his Aberdeen team face Hamilton in Lanarkshire on Tuesday looking to avoid a historic sixth game without finding the net.

Jim Goodwin struggled to put a back four together at times before the winter break and his problems have returned after Lee Hodson suffered a hamstring injury 24 hours after converted right-back Ryan Flynn learned he had damaged his cruciate ligament.

After unexpectedly losing Kirk Broadfoot on transfer deadline day, Goodwin had no defenders on the bench during his side’s 1-1 draw with Motherwell and will have to put together another makeshift back four against Livingston on Wednesday.

The Ladbrokes Championship outfit knocked out Ross County in the last round and were looking to take another Premiership scalp when Aaron Drinan gave them the lead in the fourth minute against St Johnstone at Somerset Park on Saturday.

However, a Muirhead own goal in the 18th minute drew the Perth side level.

To compound his misery,  the defender was then booked and later shown a red card by referee Steven McLean for a lunge on Liam Craig, before a Callum Hendry winner took Tommy Wright’s side through to the quarter-finals where Celtic await.