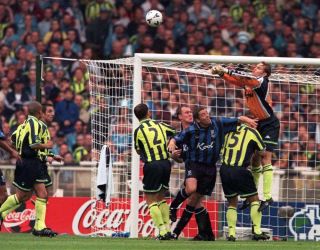 The Sky Bet Championship play-off match between Leeds and Derby was a cracker for the neutral, with plenty of goals, cards and drama.

The first year of the play-offs threw up a two-legged final between mighty but ailing Wolves and tiny Aldershot, who had finished nine points behind them in the Fourth Division standings. Despite Shots striker Bobby Barnes admitting they were “in awe” of their opponents, they prevailed in style, following up a 2-0 first leg win with a 1-0 triumph in front of almost 20,000 at Molineux three days later.

25 YEARS ON: Town beat Sunderland in the 1990 Play-Off Final to clinch a place in Division One #STFC#NeverForgetpic.twitter.com/WqzuWVjZAp— Swindon Town FC (@Official_STFC) May 28, 2015

Gary Bennett’s first-half own goal appeared to have gifted Swindon a place in the top flight for the first time in their history in an unremarkable game at Wembley. But the drama was to follow the final whistle, as Swindon were subsequently handed a double demotion for breaching Football League rules, that was reduced to them remaining in the Second Division on appeal, and the Black Cats became the first and only team to lose a play-off final and still – ultimately – find themselves promoted.

ON THIS DAY 📅 | We enjoyed one of our greatest moments 2⃣5⃣ years ago today in 1993 after beating @LCFC 4-3 in an epic Play-Off Final to secure our place in the @premierleague!#STFCpic.twitter.com/KNLRyqtyxm— Swindon Town FC (@Official_STFC) May 31, 2018

Just three years after their controversial demotion, Swindon were back in the play-off final – and this time they booked their place in the top flight in style. An opening goal from player-manager Glenn Hoddle saw them cruise into a 3-0 lead only for the Foxes to pull level in a stunning 12-minute spell in the second half. But Swindon held their nerve and sealed their belated ascent through Paul Bodin’s late penalty.

ON THIS DAY – 1995: #BWFC defeated @ReadingFC 4-3 AET in the Play-Off Final to win promotion to the Premiership. pic.twitter.com/iFjAd1QKow— Bolton Wanderers FC (@OfficialBWFC) May 29, 2016

Stuart Lovell’s missed penalty after 34 minutes proved crucial as Bolton struck back to clinch victory in extra-time. Reading dominated the early stages and led 3-0 but Lovell’s miss changed the course of the game. Owen Coyle and Fabian de Freitas pulled Bolton level and Mixu Paatelainen gave the Trotters the lead in extra-time. De Freitas’ second effectively sealed Bolton’s win before shell-shocked Reading grabbed a late consolation. It was harsh on the Royals,  who finished the season second but missed out on automatic promotion as the Premier League was resized.

🎥 | Clive Mendonca reckons his first at Wembley was the best of his three 👌 #cafcpic.twitter.com/bCuA7y7DJd— Charlton Athletic FC (@CAFCofficial) September 18, 2017

Arguably the greatest of all play-off finals saw Charlton striker Clive Mendonca, a lifelong Sunderland fan, score the first hat-trick in a play-off final as the Addicks battled back from behind three times to force a penalty shoot-out. The first 13 spot-kicks were all scored before Michael Gray’s effort was saved by Charlton keeper Sasa Ilic, sealing a dramatic victory for Alan Curbishley’s men, and leaving Sunderland-born Gray inconsolable.

City goalkeeper Nicky Weaver was the hero, charging the length of the Wembley pitch in celebration after saving two Gillingham penalties and completing his side’s stunning comeback. City trailed 2-0 going into the final minute of normal time before Kevin Horlock struck what appeared to be a consolation goal. But Paul Dickov netted in the fifth minute of added time to force the extra half-hour and ultimately, the penalty drama.