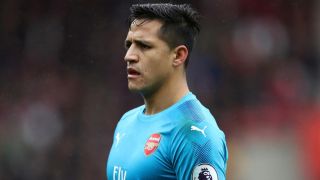 Arsene Wenger says Alexis Sanchez missing a drugs test on Monday is purely down to the "special" circumstances of completing his transfer to Manchester United and insisted the Chile international was not guilty of any wrongdoing.

Sanchez became a United player this week to end a long-running saga, with Armenia playmaker Henrikh Mkhitaryan moving in the opposite direction to Arsenal to seal the deal.

However, reports have since emerged that the Chile forward missed a scheduled appointment with doping control, with authorities apparently not being adequately informed of his whereabouts.

Speaking at a news conference on Friday, Wenger confirmed confusion had indeed been at play and told reporters Arsenal were yet to hear from the Football Association (FA) or UK Anti-Doping (UKAD) in relation to the alleged incident.

"On Monday there was a lot going on. It is special day for Alexis Sanchez because you have to do paper work and you have to travel," he said.

"Is he still our player on Monday? You don't know with negotiations going on.

"It was a special event for him to miss a drugs test because he was busy with his agent somewhere else. He has been tested so many times here that there is no issue over him having a doping problem. It is just a bad day for him to be tested.

"I do not know what happened but we always try to make our players available."

Wenger, a strong advocate of anti-doping measures in football, went on to recount an occasion when Cesc Fabregas missed a test as an Arsenal player when receiving treatment for an injury in Spain, but was keen to point to the club's strong record on testing and whereabouts overall.

"It doesn't happen a lot. It happened to us when we had a player like Fabregas who went to Spain for treatment and they couldn't find him," he explained.

"Sometimes it can be difficult to localise the player at the right moment, with the number of controls that we have it doesn't happen a lot.

"I am quite relaxed because we have nothing to hide here. We always try our best to co-operate with doping control."

Wenger added: "I always pushed for football to do more against doping so I do not see why we should not co-operate. We try our best but this was a special day.

"The most important is the intention is right. The intention of Alexis was certainly not to hide, nor was it out intention to hide anything."

Attention will soon turn to the indisputable positive Arsenal took from the protracted Sanchez saga – the arrival of Mkhitaryan, who will be available to make his debut at Swansea City on Tuesday having been cup-tied for Wednesday's stirring EFL Cup semi-final win over Chelsea.

"You see straight away he is a good football player, what we knew before we got him here," said Wenger, for whom Mkhitaryan's versatility forms a key part of his appeal.

"I will know more about him after two or three goods days to prepare – the best possible position for him and how he will integrate. I don't think there will be any problems there.

"I think Mkhitaryan can play in all positions in midfield. The holding player no, but all the other positions are not out of reach for me.

"He can certainly absorb the kind of role as a winger, playmaker. I don't rule out him becoming a box to box player."