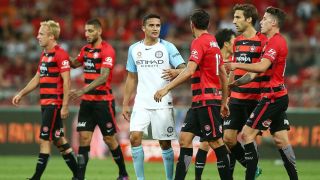 An injury-time own goal from Neil Kilkenny saw Melbourne City held to a 1-1 draw away to Western Sydney Wanderers in Friday's A-League clash.

Former Everton star Tim Cahill converted at the far post to put the visitors ahead early in the second half at Spotless Stadium.

Kerem Bulut had earlier seen a goal controversially ruled out for offside and it looked as though City would hold on for maximum points in a game short on clear-cut opportunities.

But Jack Clisby's cross was bundled into his own net by Kilkenny - while under pressure from Lachlan Scott - with only moments remaining, ensuring that the spoils were shared.

Wanderers climb above Wellington Phoenix with seven points from seven games, while second-placed City could find themselves eight points adrift of Sydney FC if the leaders beat Brisbane Roar on Saturday.

Meanwhile, Adelaide United remain without a victory after going down 3-1 to Perth Glory at nib Stadium.

The visitors took the lead on 22 minutes when Josh Risdon turned Tarek Elrich's cross into his own net, but Glory were level three minutes later thanks to Rostyn Griffiths' low finish.

Andy Keogh turned in from a set-piece midway through the second half, and after Jordan O'Doherty had picked up a second yellow card, Keogh made sure of the points by finishing a counter-attack deep into stoppage time to compound the visitors' misery.