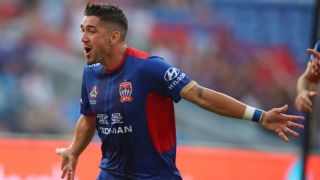 Graham Arnold's men defeated Melbourne City 3-1 a day earlier to open up an eight-point gap at the top, but the Jets ensured they kept the pressure on, even if they rode their luck a little.

Andrew Nabbout eventually opened the scoring for Newcastle just after the break, turning and smashing home from inside the area, though George Blackwood levelled in the 67th minute with a close-range finish.

United's resistance ultimately came to nothing, however, as Petratos converted from 12 yards after Ryan Strain was penalised for handball.

Western Sydney Wanderers ended a run of eight league matches without a win with a 2-0 triumph at Central Coast Mariners thanks to Brendon Santalab and Alvaro Cejudo, with the hosts seeing Wout Brama and Jack McGing sent off following video reviews in the last half an hour.

And in the final match of the day, Perth Glory beat Wellington Phoenix 1-0 to move up to fifth.