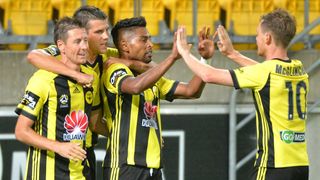 Diego Castro's 'Panenka' penalty failure late on for Perth Glory was punished by Wellington Phoenix as they secured a 2-1 win in stoppage time, while fellow strugglers Central Coast Mariners were denied by 10-man Adelaide United in a thrilling 2-2 draw.

The Spaniard had previously pulled Glory level in the first half, scoring a stunning free-kick to cancel out Sarpeet Singh's sumptuous 20-yard strike on his first start for Phoenix.

But his error ultimately cost Glory points at the end, as Castro stepped up to take a penalty he had won and attempted a chip, which goalkeeper Tandi Velaphi read and easily saved.

And Phoenix took full advantage at the end - Roy Krishna's low cross diverted in by Glory defender Shane Lowry, allowing the hosts to close to within two points of their visitors.

Phoenix take the points in the Distance Derby. February 17, 2018

Adelaide produced a fine comeback against the odds at home to the Mariners, who took an early lead through Andrew Hoole's seventh-minute free-kick.

Things then went from bad to worse 11 minutes later when Ersan Gulum received his marching orders for nudging over Trent Buhagiar while through on goal. The former Turkey international sarcastically applauded in the face of the referee's assistant and eventually had to be pushed away by his coach Marco Kurz.

The game seemed to be put completely beyond United in the 53rd minute, as Ryan Strain headed past his own goalkeeper, but they were far from finished.

Jordan Elsey found the bottom-right corner with a fine header just after the hour mark and George Blackwood levelled seven minutes from time, sending an emphatic half-volley in off the crossbar after Storm Roux had inexplicably failed to cut out a cross from the brilliant Daniel Adlung.

Further chances fell to both sides in the closing stages, but they had to settle for a share of the spoils.

What a second half!  Against the odds the boys battle back to earn a point. February 17, 2018