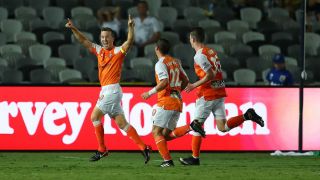 Brisbane Roar bounced back from midweek humiliation in the AFC Champions League with a 2-1 A-League win at Central Coast Mariners.

John Aloisi's side found themselves on the receiving end of a huge upset, going down 3-2 at the hands of Filipino side Ceres, but responded by making it back-to-back league wins at the expense of Central Coast.

Brett Holman found the breakthrough after 23 minutes, with the Roar swarming effectively across the Mariners' attempts to play out from the back and forcing the error.

Captain Matt McKay capitalised on further generosity from the hosts nine minutes into the second half and, although Blake Powell reduced the arrears, an equaliser remained elusive before home substitute Wout Brama was sent off for an ugly challenge on Brisbane's Corey Gameiro in stoppage time.

The Roar lie sixth, six points behind fifth-place Adelaide United, who overcame bottom club Wellington Phoenix 1-0 thanks to George Blackwood holding his nerve in a one-on-one opportunity just after the half-hour mark.