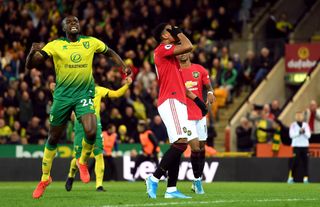 However Ole Gunnar Solskjaer tried to dress it up, Manchester United’s record from the penalty spot this season looks like no laughing matter.

Norwich goalkeeper Tim Krul denied both Marcus Rashford and Anthony Martial from the spot at Carrow Road on Sunday, meaning United have missed more penalties than they have scored this campaign.

Solskjaer may have joked that Rashford did the “honourable thing” in missing the first as it did not look a clear-cut penalty, but behind the smile he must be concerned about his side’s record.

Though the misses made no difference to the result as United ran out 3-1 winners, their first Premier League away victory since February, his search for a reliable penalty taker goes on.

Not counting the penalty shoot-out against Rochdale in the Carabao Cup, United have taken seven penalties this season but converted only three.

Rashford, Martial and Paul Pogba have all tried their luck and all have missed at least once, with failures from Rashford and Pogba costing United points early in the campaign.

It is not actually a new problem for United, who have the second worst record among all Premier League clubs over the last 10 years from the spot, but one that feels particularly acute in a season when they are struggling to score goals from open play.

Though Rashford found the net from the spot in the season opener against Chelsea, within a fortnight there were costly misses that started something of a controversy over who should be taking them – a question which still does not seem to be settled.

Pogba missed the chance to score a winner in a 1-1 draw with Wolves before Rashford fired against a post against Crystal Palace at Old Trafford.

United were 1-0 down at the time, and though they levelled through Daniel James in the 89th minute, Patrick van Aanholt scored a stoppage-time winner for the visitors.

Rashford looked more assured as his penalty proved the match winner in a 1-0 victory over Leicester on September 14 while Martial raised his hand as an option by scoring from the spot in last week’s 1-0 win over Partizan Belgrade in the Europa League, only to miss three days later at Carrow Road.

Solskjaer was in a mood to laugh it off after the game – “they all score penalties, apart from when it comes to the ones that matter” he said – but with his side averaging only 1.3 goals per game in the league this season, it is surely a serious concern.