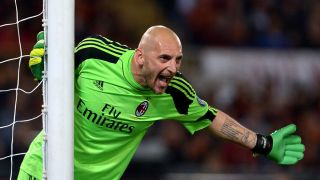 Christian Abbiati was left frustrated that AC Milan could not kill off their Coppa Italia tie despite earning a 1-0 win over Alessandria in the first leg on Tuesday.

Mario Balotelli's first-half penalty settled the encounter in Turin, though M'Baye Niang hit the post late on and Andrea Poli saw a goal harshly ruled out for offside in what proved to be a scrappy first leg.

Abbiati, who had little to do during the 90 minutes, was disappointed his side were not more clinical but was happy to record a victory against a third-tier team who have already upset Serie A opposition in Palermo and Genoa this season.

"We certainly had chances to score more goals and should've finished it off. We hit the woodwork as well," he told Rai Sport.

"There were a thousand possible pitfalls and Alessandria are a really impressive side, but we had to get the win.

"The Coppa Italia is one of our objectives, along with qualifying for Europe."

Milan now turn their attention to the derby with Inter at San Siro on Sunday.

"It's the big game in Milan and we are highly motivated to get the three points, so from tomorrow we'll start to think about it," Abbiati added.

The second leg between Milan and Alessandria will take place on March 1.