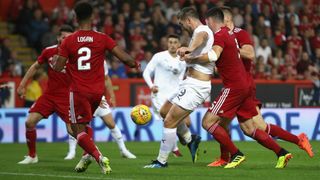 Sam Vokes struck a late equaliser as Burnley came from behind to claim a 1-1 draw at Aberdeen in the Europa League's second qualifying round.

Substitute Vokes controlled a knockdown from strike partner Chris Wood to lash home with 10 minutes to play in Burnley's first European tie for over 50 years.

But Vokes fired home to ensure the Premier League side will be expected to progress to a third-round tie with Istanbul Basaksehir in next week's second leg at Turf Moor.

Sean Dyche's side suffered an early blow when they lost Nick Pope to injury, the England goalkeeper hurting his shoulder.

With Pope's colleague Tom Heaton sidelined due to a calf injury, former Manchester United goalkeeper Lindegaard was introduced for his Burnley debut and one of his first tasks was to pick the ball out of the net.

Referee Daniel Siebert pointed to the penalty spot after judging James Tarkowski had fouled Sam Cosgrove in the area and Mackay-Steven made no mistake, sending Lindegaard the wrong way to open the scoring in the 19th minute.

Johann Gudmundsson and Wood fired efforts off target and Aberdeen goalkeeper Joe Lewis made a sensational save to keep out Jack Cork's header in the 51st minute.

At the other end, Lindegaard turned away Mackay-Steven's header as Aberdeen threatened to extend their lead, but Burnley levelled with 10 minutes to go.

Wood headed a long pass on for Vokes and the Wales striker controlled a bouncing ball well, held off two Aberdeen defenders and thumped a powerful finish into the roof of the net.

With neither side able to nudge ahead in the closing stages it is all to play for when the tie resumes next Thursday.