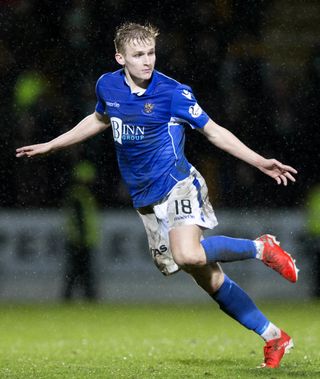 An early goal from midfielder Ali McCann gave St Johnstone a 1-0 win at Aberdeen, who have now gone four league games without a goal.

The Dons fans vented their frustration as the match wore on, with Derek McInnes’ side having won only one of their last seven league matches.

There was intrigue for the home fans with new signing Ronald Hernandez handed his debut, the Venezuelan international one of three changes form the side that had drawn with Rangers at the weekend.

And Aberdeen were instantly on the attack, but Jon Gallagher sent his low effort into the side netting from Ryan Hedges’ pass.

Tommy Wright’s men took the lead after just six minutes, though, as Hedges chose the wrong pass in attack, allowing Liam Craig to lead the charge forward. He picked out McCann as the Dons defence parted and the young midfielder clipped past Joe Lewis to open the scoring.

Saints could have gone further in front had Michael O’Halloran’s run on the right ended with a finish of similar quality, but he skewed his effort into the stand.

Aberdeen had been poor throughout and a Scott McKenna header from a Matty Kennedy corner went wide of the near post, before they finally registered a shot on target three minutes from the interval when Hedges struck on the turn from a Hernandez throw, but Zander Clark was equal to his effort.

Both sides suffered first half injury woes, with Ash Taylor leaving the action for the home side, and O’Halloran for the visitors.

Aberdeen could have been level early in the second half when Kennedy slipped in Sam Cosgrove, but the Dons’ leading scorer was denied by the feet of Clark.

With their lead intact, the visitors were happy to sit in and let Aberdeen play in front of them but, after Bruce Anderson replaced Hernandez, the Dons could have levelled as Clark saved well from McKenna after a Niall McGinn free-kick, before Cosgrove put the loose ball over the bar.

As much as Aberdeen huffed and puffed, they struggled to break down the resolute Saints defence which always seemed to have their hosts at arms length.

They finally had a chance in the final minute when David Wotherspoon brought down Lewis Ferguson 20 yards out, in a central position.

Up stepped McGinn, the Dons’ set piece expert, but though he had Clark beaten, he saw his superb free kick come off the inside of the post.