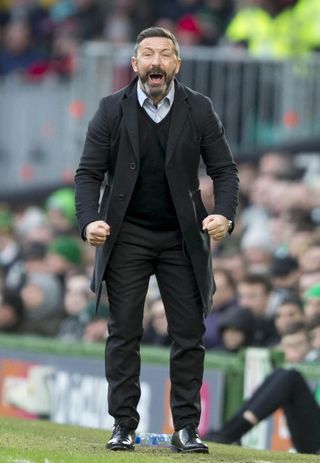 Aberdeen boss Derek McInnes insists the pendulum has not necessarily swung towards Rangers in their William Hill Scottish Cup tie.

A 1-1 draw in the quarter-final tie at Pittodrie on March 3 means a keenly-awaited replay will take place at Ibrox on Tuesday night, with the winners facing Celtic in the semi-final at Hampden Park.

McInnes is encouraged by two 1-0 wins in Glasgow against Rangers this season – one in the Betfred Cup semi-final at Hampden Park, the other in the Ladbrokes Premiership at Ibrox – as well as Saturday’s goalless draw against league leaders Celtic at Parkhead.

The former Rangers midfielder said: “When the draw was made we recognised the challenge, as I’m sure Rangers did. I felt we were very good in the home game for long spells.

“But I don’t have the same opinion that other people have, that now the game is back at Ibrox we’ve had our chance, it will be Rangers who are favourites.

“I get why Rangers were favourites maybe when the tie was drawn but for us it doesn’t really matter if we are in Glasgow, anywhere we play we always have a confidence that we can win the game.

“So it will be nice to try to hopefully prove people wrong, that we can go down there and try to get ourselves into a semi-final.

Second-placed Rangers sit eight points clear of the Dons in the league and are unbeaten in 11 matches in all competitions, with seven wins and four draws.

However, goalkeeper Joe Lewis believes Aberdeen will travel to Glasgow without any trepidation.

The 31-year-old said: “Some teams, when they play against the Old Firm down here think, ‘if we can just put in a decent performance and not lose too heavily, we will be happy and not let it dent our confidence too much.’

“At Aberdeen that is not the case at all. We go into every single game we play with an expectation to win, and the game on Tuesday will be no different.

“We have done it. We won at Celtic Park at the end of last season. We won in the semi-final of the League Cup (against Rangers) at Hampden.

“We have won at Ibrox this season. So there should be no need for the manager to emphasise that.

“Everyone in that squad has been there and done it and knows what type of performance it takes, everyone switched on for 90 minutes and at their best.

“We fully expect to go there and give a good account of ourselves and come away with a win. That is how you have to be.

“I’m sure Rangers will be doing the same. They will have confidence themselves and I think that bodes for an excellent game.”