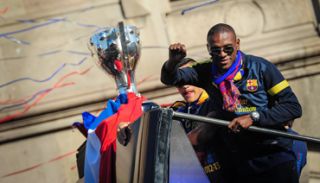 "I would have liked to have stayed and played on at Barcelona but the club saw it differently and I have to respect their decision," he told a news conference while struggling to control his voice.

"I am going but I will surely return."

The 33-year-old left-back, who fought his way back into the squad after having a liver transplant last year, was joined by club president Sandro Rosell and sports director Andoni Zubizarreta who praised him for his bravery in adversity.

"He has won our hearts because you can never write him off," Rosell said. "He has had the strength to overcome all types of difficulties - he has taught us life lessons we will never forget.

"We are not saying goodbye, only 'until we meet again'. When he wants to hang up his boots Barca will open their doors for him to come back and be technical director of the youth academy.

"It's what we want and what we think he would want. If he thinks he can help us in another way we will work on that option," added Rosell.

Abidal was supported at the event by the Barca coaching staff and squad including players in the front row such as Gerard Pique, Carles Puyol, Xavi and Victor Valdes who is also set to announce on Friday he will leave the club.

"The truth is I am very sad," the Frenchman said, wiping his eyes. "I was thinking of continuing because I have fought hard to return to play here.

"In the end there are two roads, to continue or leave and I will take the latter. I want to continue playing but I have to finish my contract," added Abidal.

"I don't have any offers but I have time to think about that. The important thing is going to be the last game and to see if the boss [Tito Vilanova] puts me on for the last few minutes at the Nou Camp."

Champions Barca finish their campaign at home to Malaga on Saturday when a victory would see them match La Liga's record of 100 points.

"I think I can play for one or two more seasons," said Abidal. "The doctors haven't told me to stop playing because it puts my life at risk - if they had done I would have stopped."

Zubizarreta was clearly uncomfortable when he was asked why Abidal was not being offered a contract extension at a news conference that lasted around an hour.

"It's a professional decision, a complex one, one of those ones that weigh on your mind when you go to bed," the former Spain goalkeeper said.

Abidal joined Barca from Olympique Lyon in 2007 and during that time they won four La Liga titles, two Champions League crowns in 2009 and 2011 and two King's Cups.

His spell at the Nou Camp was marked by a couple of lengthy absences after he was diagnosed with a liver tumour.

Abidal underwent an operation in March 2011 before making a triumphant return two months later to lift the Champions League trophy after Barca's victory over Manchester United in the final at Wembley.