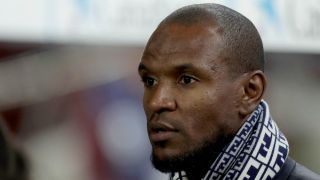 Eric Abidal has posted an image of his cousin in hospital as he again moved to reject claims that former Barcelona president Sandro Rosell illegally bought him a liver.

The former France defender required a transplant in 2012 after the discovery of a tumour on his liver, with his cousin Gerard reportedly having donated the organ.

Spanish press this week reported that Rosell, who was arrested in 2017 as part of a money-laundering investigation, purchased the liver.

On Wednesday, Barcelona rejected claims of any wrongdoing, while Abidal and the Hospital Clinic de Barcelona, where he underwent the procedure, also denied the allegations.

Abidal, who is now the club's technical secretary, posted a picture on Twitter in tribute to his family member with the accompanying caption: "With the publication of this image I want to ask respect to my cousin Gerard and defend his honour.

"I publicly denounce the attitude of some media that continue to question the legality of an intervention that saved my life! Stop it!"

It was ruled by a Spanish court last week that Rosell will stand trial on charges of money laundering, in relation to the sale of television rights for Brazil matches, for which he remains in custody.

Speaking on Wednesday, Rosell's lawyer, Pau Molins, questioned the timing of the allegations made against his client and rejected the claims relating to Abidal's transplant.

"It suits them to paint Sandro Rosell as a beast," he told RAC in quotes reported by Marca.

"We don't know anything about this report, but it annoys me that it is coming out one year after he has been imprisoned and as he waits for trial.

"The conversation that has come out has absolutely nothing to do with the [other] case," Molins said.

"I think they don't want to go to trial so they are bringing out things to see how to buy time and how to hide, because they don't know what to do with Rosell in prison."