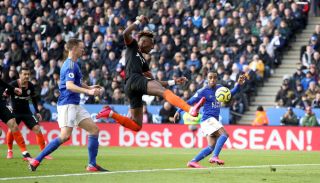 Tammy Abraham has told boss Frank Lampard he can rely on him to help fire Chelsea into the Champions League.

The 15-goal forward remains the club’s main striker after the Blues’ January frustrations.

They had their transfer ban lifted in December but did not make a signing last month despite being linked with Edinson Cavani and Timo Werner.

Olivier Giroud failed to make the bench for Saturday’s 2-2 draw at Leicester with Michy Batshuayi, Chelsea’s other senior striker, an unused substitute.

Abraham is Lampard’s first-choice forward and the England hitman insisted he can be the one to ease the manager’s striker worries.

“Playing for a club like Chelsea there is always going to be pressure,” he said, with the Blues third in the Premier League.

“For me it is about being in the right place at the right time and believing in myself and my abilities as well. I am sure I will score a few more. I like the pressure and I play under pressure.

“For me I can’t complain, it has been a great season so far. I would like to push on. There are still massive games. I just have to be ready for them and take my opportunities.”

But the 22-year-old would have welcomed the competition at Stamford Bridge after his impressive first half of the season.

“The players we were talking about coming like Cavani and other top-class strikers who have been around in the game for many years,” he said.

“It would have been nice if he had come. He would have been someone I can learn off and steal his ideas to add to my own. It didn’t happen though and for me it gives me that extra push and desire to claim my position and be as best as I can.”

Abraham played through the pain at the King Power Stadium after an ankle injury suffered at Arsenal last month.

Chelsea do not play again until hosting Manchester United on February 17 with Abraham relishing the chance for a mid-season break.

He said: “My ankle is still painful but sometimes as players you have to play through pain. The medicine started to wear off in the second half but I will take this break to recover.

“I am definitely in favour of the break. I can’t wait. It is needed really after a long hard first few months of the season.”

Saturday’s draw kept the Blues eight points behind third-placed Leicester, with the Foxes 12 points ahead of Tottenham, who sit fifth, in the race for the Champions League.

Antonio Rudiger scored twice for the visitors with Harvey Barnes netting for the Foxes and boss Brendan Rodgers urged them to book a top-four spot.

Rodgers said: “From the start of the season we were nowhere near the budget levels of the top six teams. We were classed in a group along with West Ham, Everton and Wolves as possible teams who could maybe break into the top six.

“All the trends have shown the gap between sixth and seventh is getting bigger. We’re not settling for that, we want to finish off the final 13 games as strong as we can.”