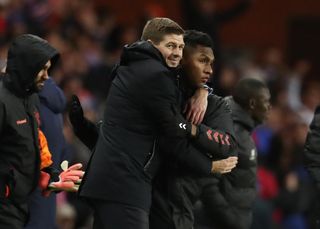 Steven Gerrard says the abuse aimed at Rangers striker Alfredo Morelos is proof Scottish football has a problem with racism.

The Colombia striker claimed in an interview this week that he has experienced racism both on and off the pitch during his two-and-a-half-year stint in Glasgow.

Morelos hit the headlines last month when he aimed a throat-slitting gesture at Celtic fans after being sent off at Parkhead.

But he insists he was only signalling to the Hoops support to cut out the abuse.

Now his manager has vowed to give the 23-year-old his full support – but believes the situation should be a national embarrassment.

He said: “We always support on or off the pitch. Certainly if they are feeling they are suffering from abuse in the stands, we’re always there 100 per cent for our players.

“And we’re always there to support other players that maybe are on the end of it in our dressing room as well.

“It seems as if racism is still a problem, certainly in this country.

“I’ve been one who has been very vocal in terms of saying we all have to keep doing what we need to do to eradicate it, because it’s bang out of order.

“That’s not me just supporting my own players, that’s across the board.

“It’s very disappointing that we’re talking about situations like this in this day and age. It’s embarrassing, really.”

Morelos has been linked constantly with moves away from Ibrox recently on the back of his hot scoring streak.

And Gerrard hopes the slurs Morelos claims he has faced will not be the deciding factor when the 28-goal frontman comes to decide his future.

He said: “I hope (Alfredo will not be driven out), because we love working with Alfredo. He’s a fantastic player.

“I know I’m always going to be biased towards him but I think he brings something to this league.

“He makes the league a lot more exciting, so I hope not. I know he feels strongly about these issues.

“My advice to Alfredo is to continue to be strong – we’re here for him if he needs that support – and to continue to do what he does best, which is scoring goals and making our supporters happy.”