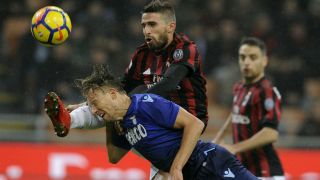 AC Milan failed to make the most of home advantage in the first leg of their Coppa Italia semi-final with Lazio, drawing 0-0 in a disappointing match on Wednesday.

Gennaro Gattuso's men were particularly underwhelming, offering almost nothing from an attacking perspective and were only spared defeat by the fact Lazio failed to capitalise on their superiority.

The first half was rather cagier than their meeting in Milan's 2-1 Serie A win on Sunday, with clear-cut chances rare at both ends of the pitch.

Lazio looked the more threatening and, given the onus was on Milan to attack, Gattuso will surely have been concerned by his side's lack of craft.

2 - AC Milan made just 2 shots in the 1st half tonight: only twice had they fired fewer attempts before half-time this season (1 vs Fiorentina and AEK). Restrained. January 31, 2018

Things improved slightly upon the restart and both sides saw chances go begging, though it took a while for an increase in excitement.

Chances did flow in the final 20 minutes but substitute Hakan Calhanoglu missed a glorious opportunity that Milan were left to rue that as they were held to a goalless draw.

Lazio began the contest looking far more assured on the ball than their opponents, with Felipe Anderson and Jordan Lukaku particularly menacing on the visitors' left flank.

But, for all their superiority, chances were not forthcoming and Milan managed to ride out the early storm, gradually getting to grips with Lazio as proceedings became rather more balanced.

The match's first opportunity eventually arrived just after the half-hour mark, but Lucas Leiva could only head Lukaku's cross over from close range under pressure from Fabio Borini.

Ciro Immobile then tried his luck from distance and stung the palms of Gianluigi Donnarumma, with Sergej Milinkovic-Savic following suit just before referee Marco Guida brought the disappointing first half to a close.

Milan looked a little more purposeful at the start of the second half and went close in the 53rd minute, as Manuel Locatelli saw his volley crucially blocked by Lucas.

But that failed to herald a period of Milan pressure, with the visitors next to go close just after the hour – Immobile forcing Donnarumma into an excellent save down to his right.

The pressure on the Milan defence suddenly became relentless, as Milinkovic-Savic and lively substitute Luis Alberto saw efforts that were seemingly goal-bound blocked in quick succession.

Immobile then sent a curling attempt agonisingly wide of the right-hand post with 22 minutes to go.

Yet Milan appeared to wake up towards the end and Lazio had a lucky escape 15 minutes from time, as Patrick Cutrone saw his header palmed straight to Calhanoglu, who inexplicably fired over the open goal from about 10 yards.

That proved to be Milan's final chance, as Lazio subsequently tightened up and clinched the draw – the minimum their efforts deserved.