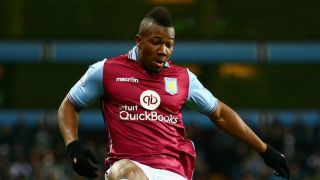 Aston Villa forward Adama Traore is facing eight to 10 weeks on the sidelines after breaking a bone in his foot in last Saturday's 3-1 defeat at Sunderland.

The former Barcelona youngster, 19, has scored once in 10 appearances for his new club, but now faces a lengthy spell out of the team

"Adama Traore has been ruled out for eight to ten weeks with a broken bone in his foot," Villa posted on Twitter.

The Premier League's bottom club play League Two team Wycombe Wanderers in an away FA Cup third-round tie on Saturday and boss Remi Garde hopes it will give his players the chance to experience a rare win.

He said: "We need to win because it is a feeling the team has been missing for too long.

"It is the FA Cup – it is huge for the fans and the players. We have to accept critics because we are bottom of the table but we have must have pride and say 'we can do more'.

"For such a long time, the feeling that has been in the players cannot be positive at all. A victory could be the beginning of a better feeling."