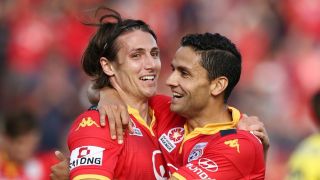 Prior to the Jets' visit, Adelaide saw play-off rivals Melbourne City, Melbourne Victory and Sydney FC all beaten this weekend, with Carrusca's winner meaning the four sides are separated by just two points.

Jets, fresh from a 6-1 hammering at the hands of Perth Glory, were without suspended captain Nigel Boogaard and forward David Carney, who is reportedly close to joining Sydney.

And, while the visitors fashioned good chances such as Enver Alivodic's wayward first-half effort, Carrusca settled the contest when he converted Bruce Djite's cutback two minutes before half-time.

Djite muscled his way past Daniel Mullen before finding Carrusca, who made no mistake with the finish.

Carrusca's winner was the first goal in 223 minutes of action between the sides since the Argentinian's winner at Hunter Stadium last season.