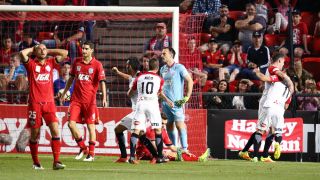 Western Sydney Wanderers avenged their A-League Grand Final defeat to Adelaide United with a 2-1 victory at Coopers Stadium on Friday.

The champions triumphed 3-1 in the season showpiece at Adelaide Oval in May but suffered just a second defeat in 10 matches against Wanderers thanks to a double from Brendon Santalab.

The hosts continued to enjoy the better of the chances until Santalab struck the equaliser on 67 minutes, steering the ball beneath Eugene Galekovic from six yards out after a cross-cum-shot from Mitch Nichols.

Santalab was fortunate to stay on the pitch in the closing stages after a heavy lunge on James Holland, though referee Shaun Evans felt the foul warranted only a yellow card.

And United's frustration at that decision was compounded in the first minute of injury time, when the 34-year-old striker swept home the winner at the far post after Nichols picked him out in acres of space.

The victory comes as a relief for head coach Tony Popovic, who saw his side thrashed 4-0 in the derby at home to Sydney FC last Saturday following a 4-1 FFA Cup defeat at the hands of Melbourne City.