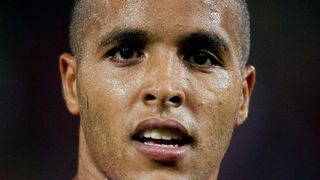 Lokomotiv made most of the early running took a deserved 35th-minute lead when Uzbekistan international Sardor Rashidov opened his body to steer Shukhrat Mukhammadiev's cutback into the bottom corner.

The Qatari side improved after the break but a defiant showing from the hosts meant they were staring at defeat until Almoez Ali took a tumble under Salim Mustafoev's challenge in the box inside in the 88th minute.

The match had ticked beyond 90 minutes by the time El Arabi drilled home, sending Ignatiy Nesterov the wrong way, and the Morocco striker then powered forward on the break to brilliantly have the last word.

FULL-TIME | Lokomotiv (UZB) 1-2 Al Duhail SC (QAT)Youssef El-Arabi's late double sends the Qatari side to the round of 16 after winning four in a row!March 12, 2018

Elsewhere in Group B, Al Wahda are level on three points with Lokomotiv after belatedly getting their campaign up and running with a 3-0 win over second-placed Zob Ahan.

Sebastian Tagliabue caught the visitors napping to convert Balazs Dzsudzsak's free-kick in time added on at the end of the first half.

Mourad Batna curled in a majestic second before the hour and turned provider for Mohamed Al Akbari to make the points safe.

There remains everything to play for in Group D, where Al Rayyan ended a run of three consecutive draws by beating Al Hilal 2-1.

Abderrazak Hamdallah was shoved over by Abdullah Al Zori and converted a 44th-minute penalty, with the same player's deft backheel allowing captain Rodrigo Tabata to double Al Rayyan's advantage midway through the second half.

Yasser Al Qahtini netted the game's second penalty in the 89th minute, prompting an entertaining goalmouth fracas as Al Hilal sought a quick restart, but time was against them.

Al Rayyan are now level on points with leaders Esteghlal, who were pegged back to a 1-1 draw by Al Ain - Tsukasa Shiotani scoring superbly from the edge of the area in the 78th minute to cancel out Mame Thiam's third of the competition from the penalty spot.