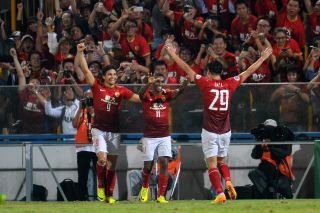 Marcello Lippi's side came into their home leg of the tie after a dominant victory in Japan last week and they pressed home their advantage on Wednesday – becoming the first Chinese club to reach the final since 1998.

Brazilian striker Muriqui was the star of the show as he struck two late goals to secure their spot and break Ricardo Oliveira's record of 12 goals in the competition.

They took the lead in the 16th minute through Elkeson – although the striker thought that he had broken the deadlock three minutes earlier only to see his effort ruled out by the referee.

It did not take him long to put that disappointment behind him as he met a pass from Dario Conca to put the hosts ahead.

The home side dominated much of the rest of the game and the floodgates finally opened in the last 35 minutes.

Conca doubled his side's tally before Muriqui came to the party and added a late brace to take his tally to 13 goals in the competition this season.

His first came after another assist from Conca, before breaking the record in the closing minutes as he rounded Takanori Sugeno and rolled the ball into an empty net.