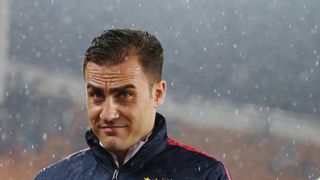 Guangzhou Evergrande and Al Hilal are staring at surprise AFC Champions League exits in the last 16.

Asian giants Evergrande are trailing 2-1 heading into their second leg against South Korea's Seongnam, but Fabio Cannavaro's men are hosting on Wednesday.

Evergrande are in a troubling run of form, with a 2-2 draw at home to Guangzhou R and F extending their winless run to four games.

They need a turnaround in fortunes if they are to live up to expectations in the Champions League this season.

In Ricardo Goulart, Evergrande have the equal leading goalscorer in the tournament in 2015.

However, the Brazilian netted all six of his continental goals in the opening three games.

Evergrande remain top of the Chinese Super League despite their recent form, and progressing to the quarter-finals would be an ideal way to kick-start their season.

Giorgos Donis' men conceded a late own goal in Iran, and that could prove costly as they prepare for their home leg.

Fellow Saudi side Al Ahli are also needing to come from behind as they host Naft Tehran with the Iranians leading 1-0.

Elsewhere, Beijing Guoan are well-placed to progress as they prepare to host Jeonbuk Motors after a 1-1 draw in South Korea.

Kashiwa Reysol carry a 3-2 lead into their home leg against Suwon Bluewings, while Lekhwiya host Al Sadd with a 2-1 advantage.

Gamba Osaka are also in control of their tie against Seoul after winning 3-1 away from home, while Al Ain host United Arab Emirates' Al Ahli after a 0-0 first-leg draw.