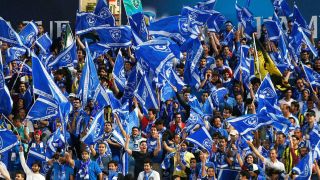 Al Hilal came from behind to beat Al Rayyan 4-3 away from home and secure top spot in AFC Champions League Group D, as Persepolis saw off Al Wahda to join them in advancing to the round of 16.

In the other matches on Monday, Al Ain dispatched Bunyodkor 3-0 at home to secure first place in Group C. Al Ahli took second spot courtesy of a 2-0 home win over Zob Ahan.

Omar Abdulrahman stole the show for Al Ain, setting up two of his team's goals either side of a brilliantly taken free-kick.

Al Rayyan's fate was in their own hands ahead of the final matchday but they trailed going into the break in Doha, Nicolas Milesi lifting the ball expertly into an unguarded net in the 40th minute after Oumar Barry had saved Nawaf Al Abid's initial effort.

Weak goalkeeping at the near post from Abdullah Al Maiouf allowed Sebastian Soria to equalise 10 minutes into the second half and they went in front four minutes later, Rodrigo Tabata's brilliant long-range effort leaving the visitors' shot-stopper helpless.

Barry kept out Milesi's initial header but proved unable to stop Khribin from stroking home the rebound to level in the 66th minute. He returned the favour seven minutes later, teeing up Milesi for a brilliant strike on the edge of the area to make it 3-2 to Al Hilal.

Sergio Garcia briefly restored some hope for Al Rayyan with a low drive in the 82nd minute, but it took just two minutes for Khribin to restore Al Hilal's buffer following a corner.

A stunning Ahmed Al Akberi goal helped Al Wahda come from 2-0 to get back on level terms at away to Persepolis, who had Taremi's clinical treble to thank for earning the 4-2 victory that sealed second behind the Saudi Arabian champions.

Abdulrahman's free-kick was the pick of the goals for last year's beaten finalists Al Ain as they cruised to a 3-0 win at home to Bunyodkor.

The United Arab Emirates star had kicked things off by slipping in Nasser Al Shamrani for the hosts' opener in the 34th minute and he also worked a brilliant short corner routine to set up Diaky Ibrahim for the third in the 91st minute at Hazza Bin Zayed Stadium.

Al Ahli, meanwhile, were comfortable 2-0 winners at home to Zob Ahan, Abdulfattah Asiri breaking the deadlock in the 63rd minute and Amiri Kurdi doubling that lead in the 84th to make sure of the points that saw Christian Gross’ side progress in second spot.