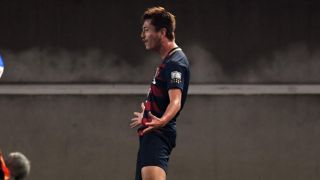 Both teams were already assured of their place in the knockout stages, but top spot was still up for grabs and the hosts went in front in the 19th minute at Kashima Soccer Stadium when Suzuki coolly steered home inside the penalty area.

Teerasil Dangda drilled home an equaliser on the stroke of half-time, only for Suzuki to restore Kashima's lead on the hour by heading home Yasushi Endo's cross.

In Group E's other match, Ulsan Hyundai consigned Brisbane Roar to bottom place with a 3-2 win at Suncorp Stadium, despite Jamie MacLaren's double for the home side.

The J.League side were already guaranteed to progress, but it was Seoul – who were already eliminated – that earned a consolation win thanks to Yoon Seung-won's effort.

Urawa now face Jeju United in the next round.

Final standings for Group F! Top spot goes to for their better head-to-head record against Shanghai SIPG! May 10, 2017

Shanghai SIPG could have taken top spot but fell to a 3-2 defeat at Western Sydney Wanderers, who scored an 89th-minute winner through Jaushua Sotirio.

SIPG finished level on points with Urawa but have an inferior head-to-head record and they now face an all-Chinese tie with Jiangsu Suning.