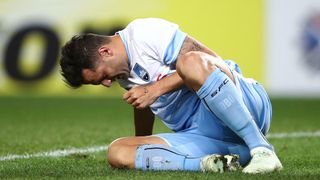 Sydney FC crashed out of the AFC Champions League on Tuesday to cap another miserable year in the competition for A-League sides.

For the second consecutive season, there will be no representatives from Australia in the last 16 as Sydney joined Melbourne Victory in suffering group-stage elimination.

The A-League's runaway Premiers' Plate winners were held to a goalless draw at home to Shanghai Shenhua despite a dominant display, while Suwon Bluewings won 1-0 at Kashima Antlers to top Group H and send both sides through.

Japanese outfit Cerezo Osaka are also out after they lost 3-1 away to Guangzhou Evergrande following Alan's brace.

That result opened the door for Thailand's Buriram United to climb into second in Group G with victory over Jeju United, duly secured by Korrakot Wiriyaudomsiri's goal shortly after half-time.

Congratulations to Guangzhou Evergrande and Buriram United for qualifying for the Round of 16! April 17, 2018

Zob Ahan scraped through ahead of Lokomotiv Tashkent, progressing due to their head-to-head record despite conceding a 90th-minute equaliser in Uzbekistan.

Al-Duhail retained their perfect record at the summit of Group B with a sixth win from six, while Al-Ahli - quarter-finalists last year - won 2-1 at Al-Jazira to top Group A.

Al-Gharafa came from behind in the last 20 minutes to triumph 3-1 at Tractor Sazi in a dead rubber elsewhere in that pool.