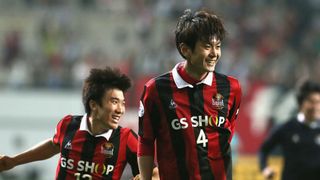 Penalties were needed to separate Seoul and Urawa Red Red Diamonds in the AFC Champions League last 16, with the South Korean side holding their nerve to advance to the quarter-finals.

Urawa led 1-0 after last week's first leg, but Seoul levelled the tie through Dejan Damjanovic just before the half-hour mark at the Seoul World Cup Stadium.

The remainder of normal time was a tense, nervy affair, but the game sprang to life in extra-time when first Adriano gave Seoul the lead, before a quickfire double from Tadanari Lee turned the tie back in Urawa's favour.

However, Go Yo-han struck in the dying moments of extra-time to force a shoot-out, and Seoul edged it 7-6.

Similar drama ensued in Sydney, where Shandong Luneng went through on away goals after drawing 2-2 at the Allianz Stadium.

Hao Junmin was the visitors' hero, with his 89th-minute equaliser on the night proving enough to send the Chinese club through courtesy of away goals after a 3-3 aggregate draw.

Rhyan Grant put Sydney back in front, before Hao spared the blushes of team-mate Diego Tardelli, who missed a penalty with 13 minutes left, to put Shandong into the last eight.

In Wednesday's other last-16 ties, Lekhwiya put up a brave fight after losing the first leg 4-0 to El Jaish but their 4-2 win in Qatar was not enough, while Al Ain won 2-0 at Zob Ahan to seal a 3-1 aggregate victory.