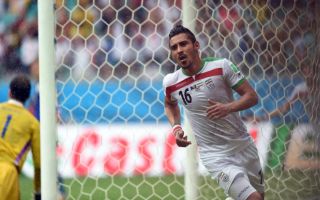 They will now look to take solace by winning Tuesday's last-eight first-leg tie at the Al Kuwait Sports Club Stadium.

Indeed, the hosts will be confident of booking their spot in the final four having won the competition for the previous two seasons.

Al Kuwait defeated Riffa 3-0 in the previous round and they have since bolstered their ranks with the signing of Reza Ghoochannejhad from Charlton Athletic.

Signing Ghoochannejhad was somewhat of a coup for Al Kuwait, after he was a member of Iran's 23-man squad for the World Cup.

He scored just once in 15 Championship appearances for Charlton last season and the 26-year-old will be keen to make an impact for his new side.

Despite Al Kuwait's recent history in the competition it would be foolhardy for them to take the challenge of Persipura lightly.

Having topped Group E to reach the knockout stages, the Indonesian outfit reached the last-eight with a 9-2 demolition of Yangon United.

Boakay Eddie Foday was the hero of that contest as he hit the back of the net five times.