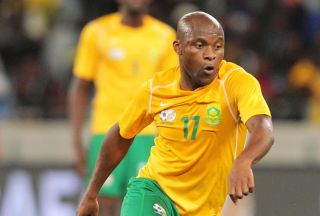 Shakes Mashaba's side came into the clash two points behind their opponents after two group games, but have now leapfrogged Congo ahead of the reverse fixture in Polokwane on Wednesday.

Two goals in quick succession early in the second half from Bongani Ndulula and Tokelo Rantie gave Bafana Bafana the win, and the result leaves them in a strong position to reach the tournament proper in Morocco, which begins next January.

There was little sign of what was to come in the early stages as Congo made a bright start on the artificial surface, Ferebory Dore testing Senzo Meyiwa with a header from a corner in the eighth minute.

Thievy Bifouma brought another save out of Meyiwa with an improvised backheel, which the goalkeeper scrambled behind.

South Africa did not call Congo keeper Chancel Massa into action until the 39th minute, and when they did Mandla Masango's effort lacked sufficient power.

However, seven minutes after the break, the visitors edged ahead courtesy of Ndulula's superb finish.

Thulani Hlatshwayo met a corner from the right with his head and, with the effort going wide, Ndulula executed a fine overhead finish, despite the best efforts of a defender on the line.

Prince Oniangue should have halved the deficit with 14 minutes remaining, but the midfielder lashed his close-range effort over the bar.

A frustrating day for Congo was summed up a minute before the end when Ladislas Douniama had a goal disallowed and South Africa survived five minutes of injury time to see out a crucial victory.