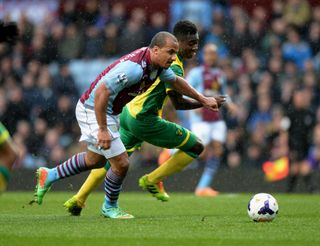 Paul Lambert's side are six points above the Premier League drop zone with 10 games remaining, with a 4-1 win over struggling Norwich City earlier this month giving them some extra breathing room.

However, Agbonlahor knows that the task of avoiding relegation is far from complete, and urged Villa to kick on and reach the tally widely regarded as the benchmark for top-flight survival as soon as possible.

"We're on 31 points at the moment - not 40," Agbonlahor told the club's official website.

"We have to keep on getting the results as early as possible and not leave it late.

"We want to pull away a bit more and try to get to that 40-point mark as quickly as we can.

"We are confident - and the gaffer (Lambert) gives us the confidence.

"His instructions are always to go out and play freely. He gives us an attacking incentive. That came off against Norwich. Now we want to continue to do it."

The Midlanders then host Stoke City the following weekend, and Agbonlahor is relishing both encounters.

"We're looking forward to the match (against Chelsea) because these are the sort of games that players want to play in.

"We have had our ups and downs this season but it's important we take the positives from the Norwich game. We will go into the next two home games with confidence."