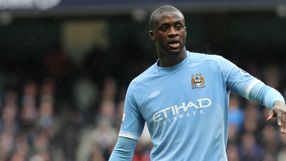 The gutsy holding-midfielder eventually declined the Gunners and instead joined his brother Kolo at Eastlands for an astounding £220,000-a-week - an offer that was seemingly too good to refuse for the 27-year-old.

Commenting on speculation that Toure is irked by Manchester City’s recent results in the Premier League, his agent Dmitri Seluk said in the Daily Mail:

"Yaya got angry. He gets angry if he thinks people around him don't feel the same about winning," he said.

"Arsene Wenger likes Yaya very much and wanted Yaya to sign in the summer so the game against Arsenal was a very emotional day.

"He has such a winning mentality that he will fight with anyone, player, fan or staff who does not share this. When he gets angry with someone it does not mean he dislikes them or wants to disrespect them but it's just his unwillingness to accept anything other than a total winning attitude.

"The most difficult thing for a club which is trying to become a big club, not a middle club, is to learn the winning mentality because it takes time and there are some players who think that fourth place is already a big position."

Yaya Toure has currently made 13 appearances for Manchester City in all competitions, scoring a solitary goal in the process.