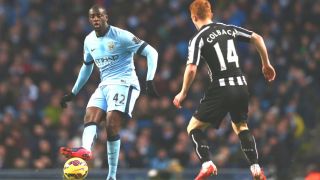 Toure's future in Manchester beyond the 2014-15 Premier League season has been in doubt since hinting earlier this month that he would consider his options in an interview with CNN.

Inter have emerged as a possible destination for the Ivory Coast international, with former City manager Roberto Mancini reportedly considering a close-season swoop.

However, Seluk has put those doubts to rest in an interview with The Mirror, claiming the 31-year-old wants to stick with the Premier League champions beyond his playing days.

"Yaya loves Manchester City and, despite what is sometimes said, he is happy at the club," Seluk said.

"In fact, he would like to stay for life. He would love nothing better than to finish his playing career with City and then work for the club after that.

"That's why I want City to give Yaya a new contract, to show him that they want him to be part of the future.

"It is not about money. It is about keeping Yaya at the club until his playing days are over and showing the club's best player that he is respected and loved."

Seluk added: "When he stops playing, then Yaya could have an executive role, perhaps as sporting director.

"Think about it. He has played in Belgium, Ukraine, Greece, France, Spain and England.

"He has won championships with Olympiacos, Barcelona and Manchester City. He has won the Champions League and the African Cup of Nations.

"He knows world football. The only market that City want to buy players from at the moment is Spain."