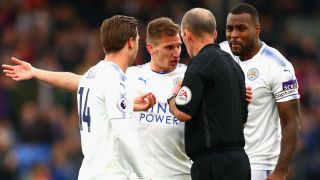 Leicester City winger Marc Albrighton has been charged by the Football Association following his red card in the 5-0 loss to Crystal Palace on Saturday.

The 28-year-old was dismissed for dragging down Wilfried Zaha after under-hitting a back pass during the second half at Selhurst Park.

Albrighton remonstrated with official Mike Dean and has now come under the microscope for the heated exchange.

The Foxes trailed by two goals at the time of his sending off but went on to ship a further three over the final 10 minutes.

"Leicester City's Marc Albrighton has been charged following the game against Crystal Palace on Saturday," an FA statement read.

"It relates to his behaviour towards the referee after his sending off."

Albrighton has until 6pm on Thursday to respond to the charge.