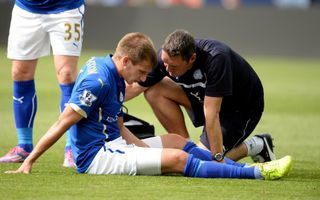 Leicester mark their return to the English top flight with the visit of Everton on Saturday, having earned promotion as winners of the Championship last season.

But former Aston Villa man Albrighton, who arrived at the King Power Stadium on a free transfer in May, could be forced to sit out the fixture after sustaining a knock in the 1-0 win over Werder Bremen on Saturday.

"(We are) disappointed to pick up a potential injury in terms of Marc Albrighton because I think he's had a very good pre-season so that's the only downside," manager Nigel Pearson told the club's official website.

"It's groin related but exactly what I don't know at the moment, we will have to wait and get the scan results.

"We will deal with it - it's something that happens and I'd rather pick up injuries in games rather than in training so we will have to see how that pans out."

Pearson also addressed the fitness status of trio Anthony Knockaert, Jamie Vardy and Matthew Upson - all of whom are unlikely to feature this weekend.

"Anthony is not going to be as long as we first thought - it's still going to be a couple of weeks," he added.

"Jamie Vardy is improving and whether he will be available for next week is, at the moment, a little bit unclear but he's doing OK - he's about where we think he should be.

"Matt will have to undergo a bit of surgery so he will be a while yet. I want someone of his quality to do what we want him to do. He is still a really good signing for us and it is frustrating for the lad more than anything else.

"He will have a big impact on the season, I have no doubt in my mind."